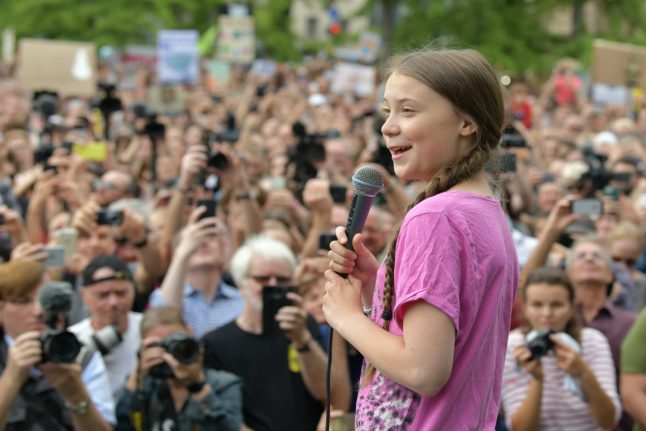 Thunberg speaking on Friday in Berlin.

“They certainly drove us to speed up” efforts to change policy, said Merkel at a press conference while nearby in the German capital the 16-year-old Swedish activist addressed the latest “Fridays for Future” rally.

“The seriousness with which Greta, but also many, many other young people, are telling us that this is about their lives, and that their life spans extend further, has led us to approach the matter more resolutely,” said Merkel.

She said that her cabinet planned to decide on key steps for a new climate law, including a likely carbon pricing mechanism, at a September 20th meeting.

Thunberg, meanwhile, addressing student activists who have regularly skipped school to protest, made another passionate appeal to their elders to urgently act on climate change. A Fridays for Future demonstration in Stuttgart earlier this year.

“We need to make sure that people save the world and save humankind,” she said about global warming which is melting ice caps and glaciers, raising ocean levels and exacerbating extreme weather events.

“Please help us, we can't do this alone, we beg you for help.”

Climate change has become a top public concern in Germany, with the opposition Greens party shooting up to poll neck-and-neck with Merkel's conservatives earlier this year.

Merkel said that Germany's recent “exceptional weather conditions” were “unsettling people and showing the cost of non-action or insufficient action” to combat the problem. The drought-plagued Elbe-River in Dresden.

Germany, Europe's biggest economy, has long promoted clean renewables such as solar and wind while phasing out nuclear power.

However it is missing its 2020 climate goals mainly because of a reliance on cheap coal mined domestically and slow progress in green mobility and building insulation.

Merkel's government has pledged to phase out coal by 2038, a deadline which the protest movement rejects as far too distant.

The chancellor also acknowledged that the Greens party is currently “very strong”.

But she said that this was forcing her party “to show that we are meeting our climate change targets, yet are also committed to innovation and committed to economic progress”.