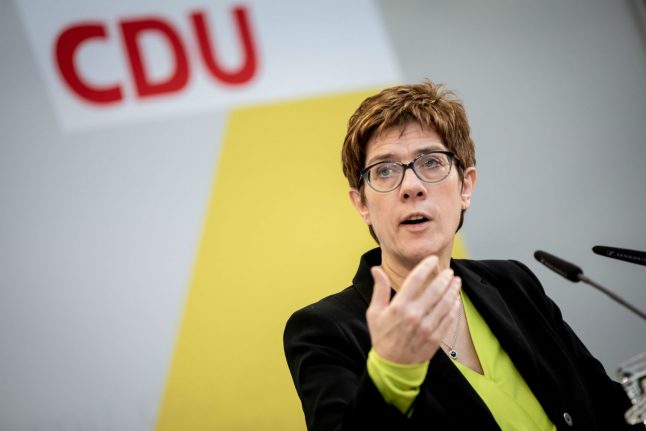 AKK speaking on behalf of the CDU earlier this year. Photo: DPA

The surprise appointment of Annegret Kramp-Karrenbauer late Tuesday came just hours after the current head of the German military, Ursula von der Leyen, was elected as the first woman to lead the European Commission.

The decision by AKK, as she is commonly known, to take charge of a sprawling administration widely seen as unwieldy and scandal-prone was described as a risky gambit to shore up political support.

At a naming ceremony at the presidential palace in Berlin in Merkel's presence, the 56-year-old formally accepted the portfolio from von der Leyen.

“The men and women of the Bundeswehr (armed forces) deserve the highest political priority and my full commitment,” she said.

“I am aware of my great responsibility and want to live up to it.”

Shakuntala Banerjee of ZDF public television said AKK was “stepping up and taking over the most difficult ministry”.

“The chances to win big are there – but the risk of failure is also greater.”

News weekly Der Spiegel said the defence ministry, rocked by a series of mismanagement allegations on von der Leyen's watch, could prove to be a “minefield” for AKK.

“But because that's the case, the ministry also offers a chance for her to sharpen her profile, in an area where she lacks it: in foreign and security policy — an area where a chancellor needs some experience,” said its commentator Philipp Wittrock.

“The chancellery remains the big goal and the defence ministry can serve as a stage for her to prove herself.”

SEE ALSO: Annegret Kramp-Karrenbauer: The reason behind the mini-Merkel headlines

However opposition politicians seized on AKK's lack of expertise in military affairs at a time when the Bundeswehr has suffered chronic equipment problems and accusations of underfunding, not least from US President Donald Trump.

“The chancellor and the CDU have shown once again that the needs of the Bundeswehr don't interest them at all,” Marie-Agnes Strack-Zimmermann of the Free Democrats told the daily Frankfurter Allgemeine Zeitung.

“They are abusing the stricken Bundeswehr for their little personnel games.”

AKK has had a rocky tenure since December as Merkel's handpicked successor as head of the centre-right Christian Democratic Union (CDU), with her poll ratings in freefall.

She had said as recently as this month that she was not interested in a cabinet post, preferring to focus her energy on strengthening the CDU.

Merkel, who turned 65 on Wednesday, is the EU's longest-serving leader and often called the most powerful woman in the world.

She has said she will leave politics at the end of her fourth term, in 2021.

After a series of shaking spells at public ceremonies in the last month, Merkel remained seated for most of the naming ceremony, along with von der Leyen and AKK.