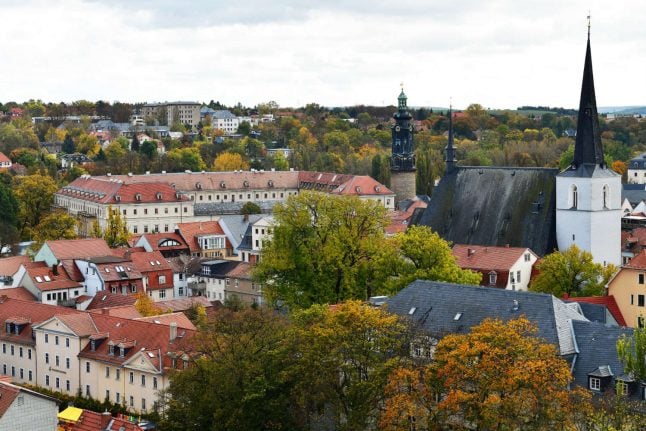 1. It is home to Europe’s longest passable, inhabited bridge

The Krämerbrücke (Merchants' bridge) in the state capital Erfurt dates back to 1325 and has been continuously inhabited for over 500 years.

At 125 metres long from end to end and home to around 80 residents, the bridge is still an important thoroughfare for locals today wanting to cross this section of the Gera River. Nowadays it boasts popular cafes, wine merchants, a bakery and a chocolate shop.

In June each year, the Krämerbrückefest takes place – a celebration of the bridge and the culture of the Middle Ages with everything on offer from plays to art installations. This year's festival takes place from June 15th-17th, meaning you still have time to catch it. The poetic greats, Johann Wolfgang von Goethe and Friedrich Schiller, both lived in Thuringia at some point in their lives.

This also means that it was in Thuringia where they created a large chunk of their work, some of which went on to become famous.

Even to this day their cultural significance is still felt in the hundreds of theatres and opera houses scattered throughout the federal state.

3. …and don’t forget about Bach Despite the fact that composer and musician Johann Sebastian Bach is so often associated with Leipzig, the city in Saxony where he spent a large part of his career, he was actually born in a Thuringian town called Eisenach.

Every year the state holds a festival, called Thüringer Bachwochen, to celebrate the composer’s deep ties to the region.

4. It is the birthplace of the Bauhaus movement In 1919 an academy for applied arts, design and architecture opened in Weimar, a city known for its cultural heritage and importance in the history of Germany.

Founded by an architect named Walter Gropius, the school was known as Bauhaus (literally ‘construction house’) and initiated the foundations of a movement of the same name. The style is famous throughout the world, but few know that it all began here. The Bauhaus movement is celebrating its 100 year anniversary this year, with 700 events planned. Although Martin Luther is more famously associated with Wittenberg in Saxony-Anhalt, where legend has it that it was here that he nailed his 95 Theses to the door of a church, Thuringia is where it all began.

Luther grew up in this state and studied at the University of Erfurt. Thuringia is also where he spent time as a monk, translated the entire New Testament from Greek to German as well as wrote the Schmalkald Articles.

6. The state's sausages are rated as the best in Germany (at least to Thuringians) Thuringia is known throughout Germany for its very own 600-year-old Rostbratwurst (roasted sausages) which are said to contain various spices like marjoram and caraway.

Each sausage is traditionally 15 to 20 centimetres long and is grilled over a charcoal fire before being eaten with mustard in a bread roll.

Pupils in the central state passed their final exams with flying colours at an average grade of 2.18, reported broadcaster MDR.

8. The first ever (West) German to have flown into space came from Thuringia

Ulf Merbold was the first astronaut from the former West Germany (1949-1990) to have gone into space.

Born in the Thuringian town of Greiz, Merbold defected to the West after school and went on to become the first West German citizen and the second German native (after Sigmund Jähn) in space.

9. It is home to the Feengrotten

Also known as the Fairy Grottoes and located in the town of Saalfeld, the Feengrotten are caverns of a former mine. The grottoes are famous for their mesmerizing structures of hanging mineral formations which exude colour and magical patterns.

After the closure of the mine in 1850, the grotto chambers opened up to the public in 1914 and have been admired by visitors ever since.

10. Even Germans aren’t sure where Thuringia is (so we've heard)

Thuringia is often one of the forgotten states of Germany in the sense that some Germans struggle to say exactly where it is. The state is often thought to be situated further east than it is due to having been one of the five states of the former East Germany.

In fact, Thuringia is actually very central. It shares borders with Saxony to the east, Saxony-Anhalt to the northeast, Lower Saxony to the north, Hesse to the west and Bavaria to the south. It's also known as the “Green Heart of Germany” due to its densely wooded regions and national attractions.