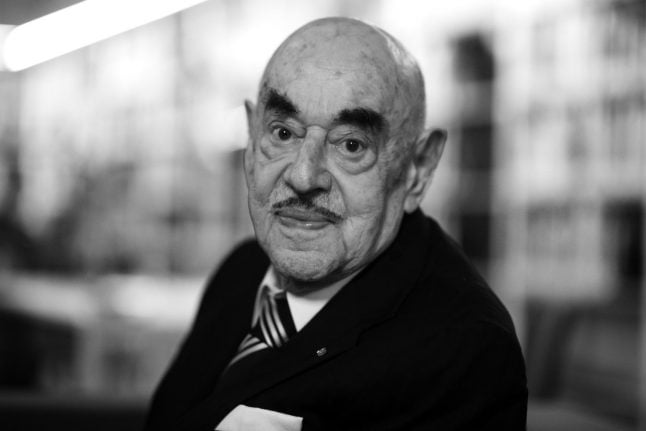 Brauner, a Jew born in Poland, made more than 500 pictures for the cinema  and television, including masterpieces grappling with the Nazi past such as 1990's “Europa, Europa”.

“Germany has lost one of the most important film producers of the young federal republic,” Grütters said after Brauner's death in Berlin on Sunday.

“The fact that he, as a once persecuted Polish Jew, went to the country of his family's murderers after World War II to produce films and commit himself to working toward Germany's democratic reconstruction was truly a gift for our country.”

Born in 1918 in Lodz as the son of a wood merchant, Brauner escaped death in the Nazi extermination camps by hiding in the Soviet Union, one of 800 survivors out of 250,000 Jews from Lodz. But 49 members of his extended family were murdered.

Sensing an opportunity to revive the legendary German cinema of the pre-war Weimar Republic, Brauner went to Berlin in the 1946 and started the CCC production company in the city's American occupied sector.

On the way to Germany he met his future wife Maria, a Jewish girl from Warsaw travelling on a fake passport. She died last year aged 92. A gala was held at Berlin's Zoo Palast for Brauner's 100th birthday on September 9, 2018. Photo: DPA

'Gave the dead a voice'

Among his biggest successes was the US-style Western series Winnetou, beloved by generations of Germans.

“I produced more films than anyone else around the world. And I knew them all,” he said, referring to the greats of international cinema, Berlin daily Der Tagesspiegel quoted him as saying.

The success of his early crowd pleasers allowed him to finance wrenching dramas that dealt with German guilt and remembrance of the six million Jews slaughtered by the Nazis.

“Europa, Europa” by Polish director Agnieszka Holland told the story of a Jewish orphan who survives the Holocaust by masquerading as a Nazi. It became an international art-house hit.

Brauner co-produced the 1970 Italian film “The Garden of the Finzi-Continis”, about a glamourous set of Italian Jews engulfed by the rise of fascism, which won the Golden Bear at the Berlin film festival and the Oscar for best foreign language film.

“His drive to show what happened in the Nazi camps and during the
Holocaust, was grounded in his own experience and the never-ending pain of
losing so many family members. He gave the dead and the survivors a voice.”