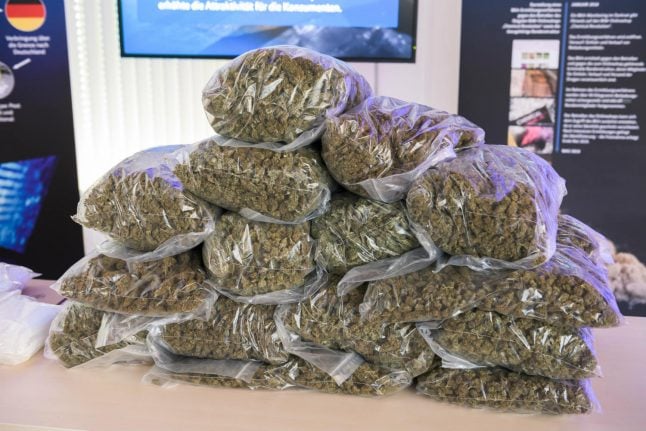 Seized cannabis on a table during a press conference at the Federal Criminal Police Office in Wiesbaden on Friday. Photo: DPA

Police and prosecutors said in a statement that they worked for more than a year to smash the so-called Chemical Revolution site, which sold amphetamines, cocaine, heroin, cannabis, ecstasy, LSD and other synthetic drugs.

Accepting Bitcoin payments, the site started operations in September 2017 and was allegedly run by a 26-year-old German man. He has been in custody since May.

The latest suspects arrested – eight Germans aged 24 to 35, two Poles aged 32 and 44 and a 43-year-old Dutchman – managed the acquisition, packaging, transport and distribution of the illicit wares.

The police operation made its first swoop in early 2018 with the arrest of a German man in the eastern state of Brandenburg found with a significant stash of drugs at his home.

Between February and May 2019, German investigators working with colleagues in Poland, the Netherlands, France and Spain arrested another 10 suspects. The statement by authorities Friday did not provide information on the total amount of drugs sold on the site or its revenues before it was shut down.

During a press conference in Wiesbaden, investigators showed some of the drugs seized, including piles of cannabis and ecsta

In May, German authorities announced that they had dismantled the world's second largest darknet market.

The encrypted platform had more than one million customer accounts, over 5,000 registered sellers and more than 60,000 sales listings.