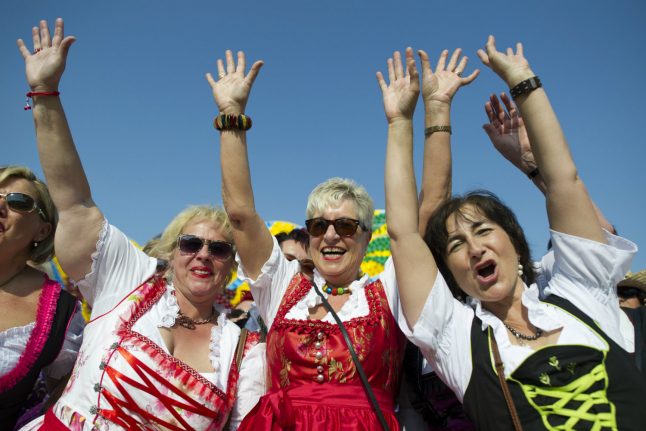 Crowds gather at Max-Joseph-Platz for the 2011 'Opera for All' performance.

Munich's annual musical extravaganza draws in opera fans from all over the country. As well the incredible musical experience, the festival also gives visitors the opportunity to visit some of Munich’s most stunning architectural sites, with performances taking place at the Nationaltheater, Prinzregententheater, Cuvillés-Theater and the Allerheiligen-Hofkirche.

In addition to full choral and orchestral performances, the festival also features recitals by individuals from the Bavarian state opera. Undoubtedly, the highlight is ‘Opera for All,’ the live transmission of a full-length opera production from the theatre to an outdoor audience seated in Max-Joseph-Platz.

Richard Strauss’ ‘Salome’ will be this year’s ‘Opera for All’ performance and takes place on July 6th. There will also be an open-air concert at Marstall-Platz on July 20th.

A number of the performances are free whilst others require tickets which can be purchased online.

Musical events spill out onto the streets of Rudolstadt. Photo: DPA.

Located in the central German state of Thuringia, this folk, roots and world music festival is Germany’s largest world music festival. Each year a different country is the focus of the festival and in 2019 Iran will step into the spotlight. A number of Iranian artists and bands have been chosen to showcase the sounds of Iran.

The opening concert will be a tribute concert dedicated to female jazz, folk and blues artists and the closing party will feature the Canadian alternative country pioneers, the 'Cowboy Junkies'. Alongside the wide range of music there is a line-up of workshops, talks and exhibitions.

To see or not to see, that is the question. This year’s open-air summer production by the Munich-based Entity Theatre sees the group tackling Shakespeare’s Romeo and Juliet after successfully performing Hamlet last year. Entity is an international, English language theatre group and has been performing in Munich for 20 years.

Performances of Shakespeare’s most famous play will take place on a number of dates throughout July and are free of charge.

Although pretzels are normally associated with Bavaria, this celebration of the doughy snack takes place in Rhineland-Palatinate in western Germany. One of the main activities is the Brezelfestlauf (pretzel festival run) of 8.2km, giving participants the chance to burn off the Bier (beer) and Brezel (pretzels) they have indulged in over the festival. Other events include fireworks on the Sunday and Tuesday evening as well as a parade on Sunday with about 100 bands, clubs and floats. During the parade over 22,000 pretzels are thrown into the crowds.

Heidelberg locals head to their boats to take in the magnificent fireworks display. Photo: DPA.

Heidelberg’s famous castles are a sight to behold at any time of the year, but even more so when the city’s annual light display takes place. This light show focuses on illuminating the castle, a spectacle which recalls the destructive castle fires in 1689 and 1693 when the troops of the Sun King Louis XIV burnt down the castle, leaving the now famous ruins. Similarly, the fireworks display dates back to a historical event: in 1613 the Elector Friedrich V put on a fireworks display in order to welcome his newly betrothed wife, Elizabeth Stuart, to Heidelberg.

According to the Heidelberg tourism board, the Nepomuk Terrace, the Neckar port and the Philosophenweg (Philosopher’s way) are the best spots in the city from which to catch the castle illuminations from 10:15 pm onwards.

Daytime events complement the night time displays. At the city’s Kornmarkt (corn market), a medieval market square, there is an arts and crafts market between 12 and 8 pm. On Saturday between 4 and 11 pm, as well as on Sunday between 12:00 and 6 pm, the city’s small Biergarten (beer garden) puts on live music performances for visitors.

SEE ALSO: Weekend wanderlust: Strolling through the hills of Heidelberg This electronic music festival states that it celebrates the three key principles of the mythologised founding father Bill Parooka – madness, love and pure happiness. According to myth, fictional mayor Bill Parooka left plans for an annual music utopia based on the slogan ‘may madness, love, and pure bliss rule this city.’

Located at a former British Royal Air Force Base which is part of Airport Weeze in the northwestern state of North Rhine-Westphalia, Parookaville is Germany’s biggest electronic festival, despite only starting four years ago. Techno is the main event; however the festival saves space for other forms of electronic music as well.

Parookaville is laid out as though you are entering an actual town. Upon arrival, festival-goers are issued with a Parookaville ‘passport’ and the ‘town’ has its own post office so you can send a postcard to jealous friends at home.

Annafest is a Franconian folk festival in the Kellerwald (cellar woods) in the town of Forchheim in northern Bavaria. The area is known for its numerous Bierkeller (beer cellars), with more than 20 open during the festival. Celebrated since 1840, this festival offers visitors and locals a chance to indulge in beer, sausages, barbecues, fried fish and the typically Bavarian Brotzeit (a bread platter with a number of dips, hams and cheeses).

Much like Oktoberfest, the festivities start off with the town’s mayor tapping a beer barrel and you will be sure to see many visitors donning their favourite Dirndl or Lederhosen for the traditional event.

This events bright lights and rides make it a far cry from the Medieval gathering it originated from. Photo: DPA.

Dubbed ‘the biggest festival in northern Germany,’ the Hamburger DOM is the North’s answer to Bavaria’s Oktoberfest. Consisting primarily of rides and stalls, the festival transforms Hamburg’s Heiligengeistfeld (field of the Holy Spirit) into a ginormous fun fair.

Though you may not guess it when faced with the modern day rides, this festival originates from the 11th Century, when a collection of merchants, craftsmen and jugglers sought shelter from stormy weather in Hamburg’s Mariendom.

This tradition lasted until the demolition of the cathedral in 1804, after which the merchants were assigned Heiligenfestfeld as their new location. Following the Wall Street crash, the wintertime market was expanded with a spring market to try and help local merchants through the crisis of the 1930s. A summer market was added after World War II.

Suitable for visitors of all ages, this event is a must-visit if you find yourself in or around Hamburg between the July 26th and August 25th.

Christopher Street Day, an annual LGBTQ+ celebration and demonstration held throughout cities globally, is the highlight of Gay Pride celebrations. Commemorating LGBTQ+ riots following arbitrary police violence against LGBTQ+ groups in New York on June 27th, 1969, this celebration aims to demonstrate for equal rights and equal treatment of LGBTQ+ individuals, as well as to celebrate Pride.

Berlin’s main event is a parade which will start at noon at Kurfürstendamm/Joachimshaler Straße and end at the Brandenburg Gate where a final rally takes place at 5 pm.

As the leading European city for Pride as well as for clubbing, numerous party locations across the city put on events which allow you to dance and celebrate until the early hours of the morning.