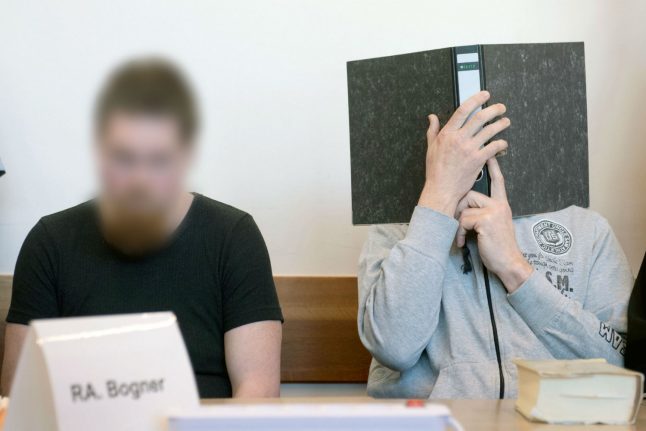 The defendants, who were identified by the court only as Andreas V. and Mario S., admitted to most of the charges against them, while the third suspect, Heiko V., said he would respond in a closed-door session.

Jointly, the three men are accused of some 450 instances of child sexual
abuse.

In a case that shocked the nation when it was uncovered in January, prosecutors say more than 40 children fell victim at the “Eichwald” camper park in Lügde, North Rhine-Westphalia state, between 1998 and 2018.

Most of the children were between three and 14 years old at the time.

His lawyer told the court he admitted to most of them, but would not speak further or answer any questions at the hearings.

Mario S., 34, was accused of involvement in the sexual abuse from 1999 until January this year, and admitted to “all of the charges laid against me”.

He had realized in pre-trial custody “what suffering and horror I inflicted on the children,” he said in a statement read by his lawyer.

Prosecutors charged 49-year-old Heiko V. with incitement to sexual abuse of children and abetting the crimes.

In German cases dealing with crimes against children, a guilty plea from the defendants can spare the victims from having to give testimony.

Presiding judge Anke Grudda had earlier closed the state court in Detmold to reporters and the public as the charge sheet was read out, saying the 27 plaintiffs had a right for their personal information to be protected.

She said repeatedly that she would prefer to avoid questioning the victims about their experiences.

As the trial opened, Grudda had said she was “stunned” by the “undoubtedly repugnant” nature and scale of the alleged crimes, adding the trial would be a “huge challenge” for everyone involved.

The case is one of the biggest abuse scandals in Germany in decades.

Public outrage was all the stormier as official failures came to light following the discovery of the abuse in January.

District police lost some of the evidence gathered during the investigation, while children's welfare offices have also been criticized over the scandal.