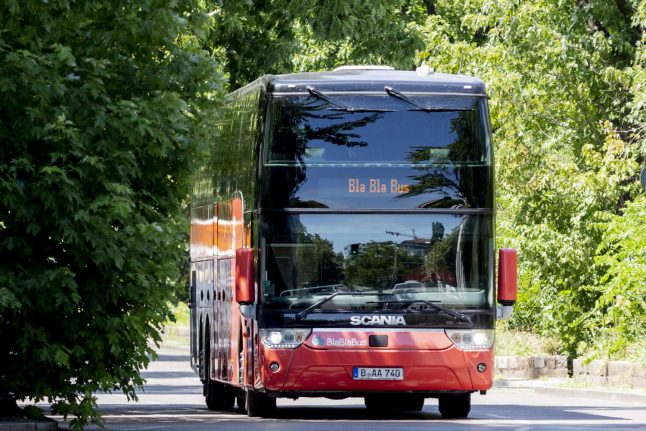 A BlaBlaBus in Berlin. Photo: DPA

That's because a new low-cost carrier coach firm has launched in Germany – and they are offering very cheap tickets to customers.

French firm BlaBlaCar has been running five new services in Germany since Monday. And next month, the firm, which is operating under the name BlaBlaBus, will add 10 more routes.

Earmarked future destinations include Stuttgart, Münster, Karlsruhe and Mannheim. They plan to offer 40 destinations by the end of the year.

With tickets starting from 99 cents until September, BlaBlaBus is shaping up to be a competitor to FlixBus.

On Monday the company said it was aiming for “more dynamic competition and a wider choice on the German long-distance bus market”.

BlaBlaBus, a brand of the French company Comuto, works with local bus companies to offer services in a similar way to Flixbus. All buses are to be equipped with Wifi, power socket and air conditioning.

BlaBlaCar is best known in Germany for its car-sharing service, which enables drivers and passengers to network and share car journeys.

However, its move into the German bus market indicates that it wants a piece of the lucrative European budget bus market.

As this graph by Statista for The Local shows, the number of long-distance bus services in Germany has grown in recent years. In 2018, a total of 287 were offered. According to the company, last year around 50 million passengers travelled on BlaBlaCar carpooling services. The company is active in a total of 22 countries.

Flixbus reacted calmly to the news, reported Tagesspiegel. “We are used to tough competition,” they said.