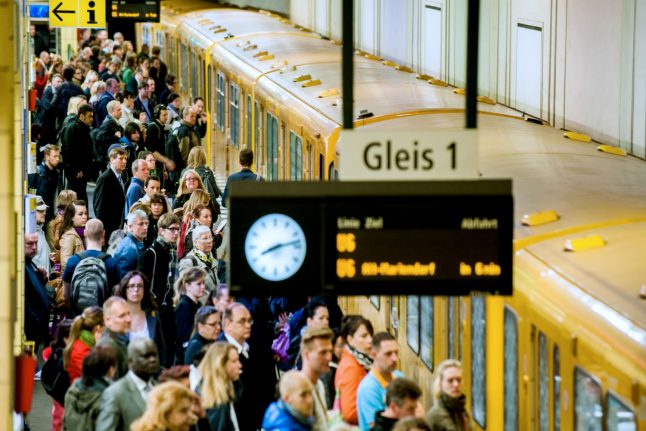 Queues before getting on public transport don't exist in Berlin. Photo: DPA

Brits have a number of undesirable stereotypes. The UK is full of heavy drinkers with bad personal hygiene and a propensity for hooliganism at football matches. It’s just as well that we’re considered unrelentingly polite.

These were, at least, the first comments I received from German people about the perceived behavior of Britons when I moved to Berlin.

An unique brand of brusqueness

Berliners have their own unique brand of German brusqueness – something they have affectionately termed the ‘Berliner Schnauze.’ The metaphor for their gruff and standoffish way of speaking, their coarse sense of humour and, to be honest, their downright rudeness is the Schnauze or “snout” of a dog (slang for mouth) and is seen as a fundamental part of the Berliner parlance. This poster in Berlin reads: ‘Be heart, be Schnauze, be Berlin’. Photo: DPA

In the German capital, you might just get angrily ushered onto a bus by a driver that doesn’t care whether you’ve paid or not. A cyclist might wave an angry fist at you for stepping into the bike lane or, quite simply, charge full speed ahead despite your attempt to get out of the way.

When asking for a Berliner pilsner at a bar, you’ll likely get the beer plonked down in front of you with a hand held out for a tip simultaneously.

When on a Saturday afternoon I took the S-Bahn for the first time since landing in Berlin, I was dismayed at the distinct lack of etiquette on public transport.

No one made an orderly queue in front of the train doors to let those who had waited for the longest board the train first. No expression of gratitude was uttered when I shuffled into the corner of the carriage to make room for a fellow passenger.

Even worse, not one person apologised for invading my already limited personal space and crushing various parts of my body in an attempt to squeeze themselves onto the packed train.

Unlike the British, Berliners are far from overzealous with their pleases and thank yous and the act of saying sorry is a formality which is often deemed unnecessary, or simply annoying.

A dear old lady turned particularly menacing when I brushed passed her in a busy street later that day, sending her shopping bags swinging to and fro on her zimmer-frame, and was far from pleased with my endless clucks of apology. Orderly queues in front of train doors are a subject of fantasy in Berlin. Photo: DPA

The following morning, I experienced my next halting realisation in the supermarket. Germans, particularly Berliners, don’t do small talk.

The English tend to chat about the mundane as an indirect attempt to make conversation interesting and less awkward. Berliners, on the other hand, see this aspect of discourse as no less than empty verbiage. The lady at the checkout simply rolled her eyes and grunted at my attempt to talk about the weather and hurriedly passed me my items as if to encourage my swift exit from the building.

You could say that Germans, in general, are economical with words. They mean what they say and they say what they mean. For Brits, it’s quite the contrary. In fact, English people will say a lot of things for the sake of politeness, including feigning interest in a person they’ve just met.

In English conversation, it’s common to say that you would like to meet someone again when the chances are, you really don’t. For a German, saying “Nice to meet you” when you don’t necessarily mean it, is uncomfortably close to deceit.

Simply trying to be nice

The British avoidance of saying what we really mean is disorientating for people from other nationalities too. My French-Canadian friend says the English tendency to pad conversation out with excessive niceties makes them come across as insincere. We, of course, don’t see it like that. We’re simply trying to be nice.

Or we’re just trying to be funny. Britons communicate in euphemisms and sarcastic phrases that Germans often take at face value. This leads to terrible instances of miscommunication, most of which are too teeth-grindingly awful to be stated here.

We also tend to understate serious things for comic effect. A good example of this is in Monty Python and The Meaning of Life, a staple British comedy film from the 80s, where the Grim Reaper’s arrival at a dinner party “casts rather a gloom” over the evening. Or when in The Life of Brian (again Monty Python), the act of being crucified is described simply as a way to “get out in the open air.”

Humour is often a good method to get around cultural boundaries. Underneath the prickly exterior of many Berlin veterans is a dry, cynical wit and an outspokenness that cuts through any kind of awkwardness. It just takes some getting used to.

An older German gentleman and I were once having a war over whose cucumber and tomatoes were whose at a market stall until the seller stepped in to confirm that they were, in fact, mine.

The man’s demeanor instantly changed at realising his mistake. He let out a rather chesty laugh and told me affectionately, with a heavy Berliner accent, that you start to lose your marbles the older you get.

Each culture has its nuances that internationals have to grow to accept. The Berliner Schnauze, while seemingly rude and antisocial, can reveal itself to be quite endearing over time. If anything, it can teach a Brit a thing or two about getting to the point.