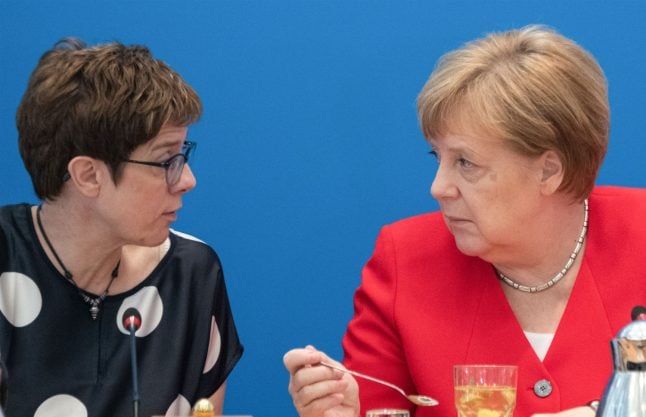 In a position paper, the top brass of Merkel's centre-right CDU sought to snuff out any talk of a possible partnership with the AfD.

Speculation of such an alliance has repeatedly surfaced, and recently, several local CDU politicians have voiced the possibility as the far-right party is poised to gain significant ground in three state elections later this year.

On Monday, the CDU's leadership sought to stamp out any such musings at the regional or local level.

“Anyone who makes a case for a rapprochement or even cooperation with the AfD must know that he is seeking rapprochement with a party that consciously tolerates far-right thinking, anti-Semitism and racism in its ranks,” the paper said.

The CDU also vowed to “deploy every possible means” to block any possible alliance with the AfD.

Pointing to the June 2nd killing of local politician Walter Lübcke, believed to have been carried out by a far-right sympathiser, the CDU said the AfD had contributed to inciting such extremist hatred.

The “propagandists of hate and exclusion laid the path for violence,” the paper said, adding that “leading representatives of the AfD and not least its members participated in this consciously”.

They therefore carry “responsibility for the targeted poisoning of the societal climate and the coarsening of the political discourse” in Germany, it said.

Anyone who backs the AfD must know that they are “then consciously also accepting far-right hate and incitement, extreme polarisation and personal defamation.”

Railing against Merkel's decision in 2015 to let in more than a million asylum seekers to Germany, the AfD scooped 13 percent of the vote in the 2017 general election.

Since its entrance into the Bundestag, the far-right party has repeatedly sparked scandals, including its leaders challenging Germany's culture of atonement over World War II and the Holocaust.