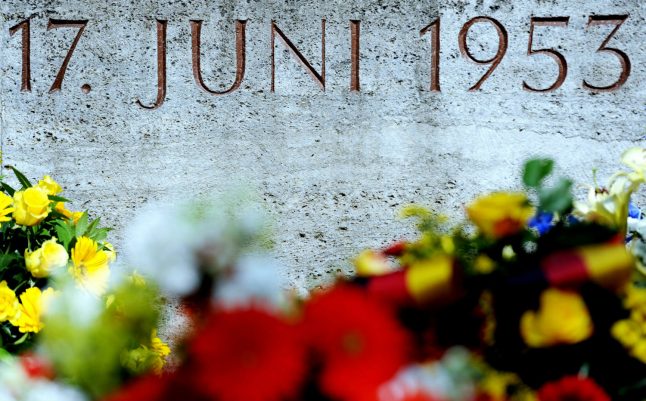 Flowers were laid at the June 17th memorial in Berlin on Monday. Photo: DPA

In the years following the Second World War, Allied and Soviet forces spent close to a decade negotiating what a future Germany would look like – unified or divided, with a standing army or relying on occupying forces for defence.

When it became clear that an agreement couldn't be reached, and that migration to the western, Allied-controlled half of the country was increasing, the East German authorities responded.

In mid 1952, Walter Ulbricht, the leader of the ruling SED party introduced a policy of increased 'Sovietization', believing that there was little point in continuing to negotiate with the West. This meant the collectivization of farming, the shifting of industry from consumer goods to military production, and a crackdown on dissent. On the ground, for the average German in the East, this meant food shortages, black-outs, and quotas on workplace production that were almost impossible to meet. It also meant that voicing opposition could more likely result in prolonged punishment or beatings.

Subsequently, resentment simmered for almost a year, until June 16th, 1953, when workers in East Berlin working on a reconstruction project decided to strike, rejecting the work quota imposed on them, and marched on government buildings.

Others, similarly dissatisfied, soon joined in, and the match swelled to thousands. News of the march spread, not only throughout the city, but the eastern half of the country, via telephone and assisted by US-backed broadcasts from the West.

The next day, strikes were held across the Soviet-controlled half of the country and it is estimated that around a million East Germans were involved in protesting against the process of 'Sovietization'. Marches occurred in all major cities in the east, and many smaller towns and villages.

Retaliation from the regime was brutal, swift and decisive. Tanks were ordered into several major cities, most prominently Berlin, and when protesters refused to disperse, they were fired upon. Casualty figures vary, but it is almost certain that in Berlin alone, more than one hundred died. Still more were wounded, or sent to prison – some consequently executed – for their involvement in the protests.

Despite a news crackdown in the East, news soon spread to the West of what had occurred. For many years, the June 17th uprising would be a touchstone for those opposed to the division of the country, and was observed as a public holiday.

Decades later, with the country reunified, the events of June 1953 seem a world away. However, they should be remembered, both as a reminder of the dangers of blind ideological faith, and the resolve of ordinary Germans to stand up for their freedoms. In an increasingly polarized world, we must do all we can to preserve that which makes us free.