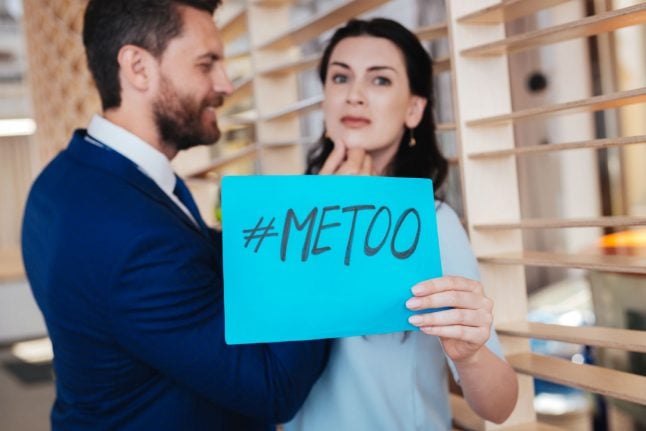 The idea for Lytt came during the #MeToo movement, when more people felt empowered to report discrimination they faced in the workplace and elsewhere. Photo: Depositphotos/yakubchuk1

More than half of all harassment in German workplaces goes unreported due to fear of repercussions and being disadvantaged against in career progression, according to a report published last year by the Forsa Institut. This 56% includes incidents involving sexual harassment, discrimination and bullying.

These statistics were one of the driving factors behind the launch of Lytt, an app aimed at fighting social injustice in Germany’s workplaces.

“Due to a personal incident at work, my co-founder Marvin Homburg and I increasingly looked into the issue of harassment and other conflicts at work more closely,” she said.

“We then investigated how we could support firms by establishing structures so that those affected could get help in every situation without fear of disadvantage.”

SEE ALSO: Do internationals face discrimination in the German workplace? And the result of these investigations? Lytt, whose name means “listen” in Norwegian.

The idea behind the technology is that employees are given access to a ‘digital assistant’ that allows them to anonymously address difficult topics and incidents – ranging from unconscious bias to discrimination – that they have experienced in the office.

“Our goal is to support employees to speak up with confidence and help companies make the workplace more healthy, inclusive and productive,” said von Petersdorff-Campen.

After reporting an incident to Lytt, the employee is given options and advice on how and if they want to progress the issue, while being in full control of what happens next.

If requested, Lytt can anonymously connect the employee to an internal confidant or an external expert in fields such as psychology or law.

The company or start-up has to be on-boarded by Lytt first and the app rolled out, but any sized company can sign up. The software is free for start-ups with up to 100 employees.

Founded in February 2019, Lytt currently has only five employees, three of whom are women. One of these is Christine Lüders, the former Head of Federal Anti-Discrimination Agency who acts as a Senior Partner and expert in the field.

“I am convinced that we cannot leave it only to men to design the world of tomorrow by building our technology,” said Laura Jentsch, 25, Lytt’s first hire and Head of Product at the company.

“In my experience, women in particular are the ones who are suffering the most in toxic working cultures.

So the idea of a disruptive communication channel that explicitly empowers employees to speak up and be supported was vital,” she said.

Together with her co-founder Marvin, von Petersdorff-Campen decided on the company’s vision while studying together at Münster University.

The time period was very formative for the pair professionally, and also coincided with a lot of changes to Germany’s society as a whole.

The #MeToo movement drew attention to the gaping schisms in inequality in workplaces around the world and exposed the fact that in Germany one in every five employees experienced discrimination, harassment or bullying at work every year.

SEE ALSO: What it's like for internationals working in Germany

In turn, it is more than just the health and well-being of the victims themselves that is negatively affected by workplace harassment.

Often the business itself suffers from a lack of productivity because a lack of transparency and communication can lead to a loss of trust in management and a decrease in motivation to perform well.

In many cases, affected employees would rather leave their company than report what has happened to them or what they have witnessed. The interface for Lytt, which makes it easy for employees to report workplace discrimination. Photo courtesy of Lytt.

Benefiting both employers and employees

In this light, von Petersdorff-Campen suggested that using an anonymous reporting app like Lytt benefits companies just as much as their employees.

“Yes, it offers a trusting way to raise concerns, but it also has a preventive effect as it shows that misconduct is not tolerated by the executive board and management,” she said.

“By offering an anonymous communication channel, employers send a trust-building signal to their employees urging them to speak up when something is not right,” she added. “This then allows companies to uncover blind spots early on to protect themselves from financial risks and image damage.”

However, with such human and very often emotional subject matters being considered, does a tech-based solution take away the sensitivity of such incidents?

Jentsch believes that the app empowers employees to take control over situations that might be difficult to address in person or amid a hefty amount of red tape.

“I believe that conversational interfaces are the most intuitive and inclusive way of interacting with technology, especially for emotionally loaded topics like ours,” said Jentsch. “The user doesn’t want to feel like they have to fill out a bureaucratic form when reporting something anymore.”