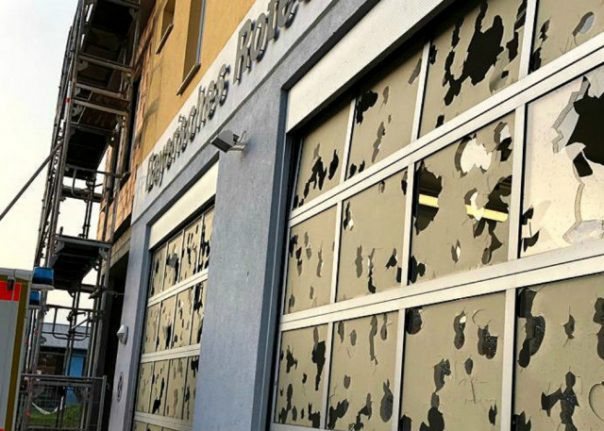 The hail caused damage to shop fronts, buildings and cars in Munich and the surrounding area. Photo: DPA

You'll need to pause ad blockers to see all the images in this story.

Several people were injured, including a seven-year-old, during a hailstorm in the southern German state of Bavaria on Monday.

Houses and cars were damaged by the hail, which meteorologists said were about six centimetres in size. Locals took to social networking sites to post videos and pictures of the extreme weather.

It came during a day of torrential rain and storms across Germany which caused flooding and disruption during the public holiday. A house damaged by the hailstones in Germering, on the outskirts of Munich. Photo: DPA

Locals spoke of their shock at the extreme weather. Roberto De Angelis told broadcaster BR24: “I've never experienced anything like it before.”

In Bavaria, winds of up to 120km/h were recorded, according to the German Weather Service (DWD).

Several car windows were broken by the hailstones. Meanwhile, houses were submerged in water as torrential rain fell.

Emergency teams were called out on 550 operations in Munich alone, DPA reported.

According to rail operator Deutsche Bahn, fallen trees on the tracks between Landshut and Munich caused restrictions to rail traffic, however, trains were able to detour.

There were some delays in freight traffic between Berlin and Dresden.

The east German state of Saxony was also severely affected by the storms. In the south of the region, 30 to 50 litres of rain fell per hour, the DWD said. The weather service also registered hailstones with a diameter of up to four centimetres. The police reported several flooded streets in the Erzgebirgskreis. The responsible police department in Chemnitz reported that these roads were not passable.

The DWD said the situation was better in parts of northern Germany. In the districts of Oldenburg and Bremen, however, there was also heavy rain.

In North Rhine-Westphalia it was rather quiet compared to the east and south. But in Mönchengladbach there was localized flooding; streets overflowed with water and cellars were flooded due to the rain.

Meanwhile, a large forest fire on a former military training area near Jüterbog in Brandenburg was extinguished.  Task forces had been fighting the fire for several days. According to the DWD, there could be more thunderstorms on Tuesday, especially in a strip from the eastern edge of the Alps to the Baltic Sea.

The large nationwide differences in temperature remain: temperatures in the southeast and east are expected to be between 25 and 32C, while in the central part and north of Germany it should be noticeably cooler at 21 to 25C. In the west and southwest, the mercury is expected to reach just 16 to 20C.