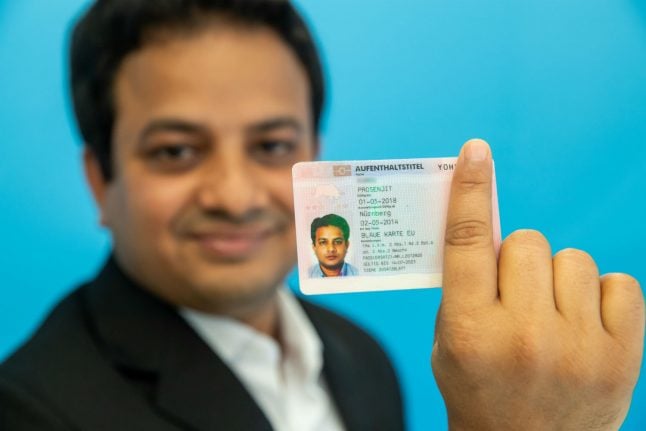 Prosenjit, a software engineer from Germany, holds a Blue Card he aquired in Nuremberg in 2018. Photo: DPA

A total of 27,000 “Blue Cards”, a type of residency permit for non-EU workers with a university degree, were issued in Germany last year, according to the BAMF statistics released on Tuesday.

That figure makes up 25 percent of all Blue Cards that have been issued in Germany since the start of the programme in 2012.

SEE ALSO: Explained: How to get a Blue Card to live and work in Germany

Germany has given out 104,000 of these visas, or 85 percent of all Blue Cards handed out within the EU. The second most popular country is France, which handed out about three percent of Blue Cards.

Why do so many Blue Card holders chose Germany? “The economy is performing very well, and cities such as Berlin are especially popular destinations for IT workers,” a spokesperson from The EU Blue Card Network told The Local.

A further reason why the programme is popular in Germany, said the Blue Card Network, is that holders have advantages that recipients of other visas don’t. For example, they can apply for permanent residency after 33 months, and move to any other EU country after 1.5 years.

Who are Blue Card holders?

Blue Cards are available to employees who earn at least €53,600 a year, or €41,808 in so-called shortage occupations (Mangelberufen) such as doctors, scientists or computer programmers.

Over a third (42 percent) of Blue Card recipients in 2018 didn’t previously have a residency permit in Germany. The other 58 percent already held some sort of permit, such as a student visa, or were renewing a Blue Card.

Next in line was China, comprising 25.9 percent of Blue Card holders. In third place followed Russia, or 8.5 percent of all holders of the card.

There were also several recipients from other countries such as Turkey and Brazil.

The majority of Blue Card holders went to work at companies in Berlin, Bavaria, Baden-Württemberg and North-Rhine Westphalia, according to BAMF.