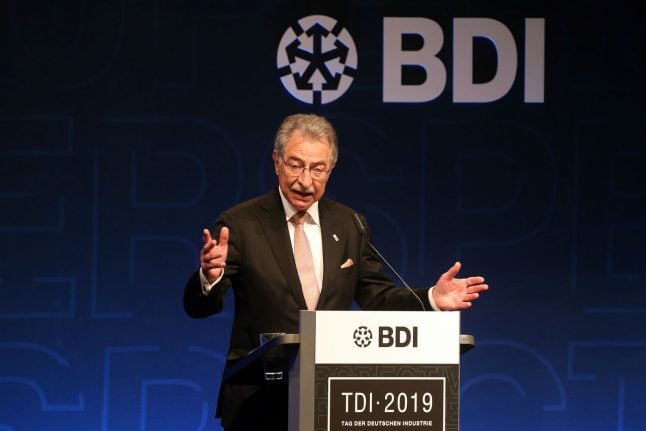 Dieter Kempf, head of the Federation of German Industry, speaking at an industry conference on Tuesday. Photo: DPA

German Chancellor Angela Merkel suffered a broadside from a powerful industry federation on Tuesday, adding to the woes of her coalition government already mired in crisis.

The “grand coalition” of Merkel's conservative CDU and the centre-left SPD “has gambled away a large share of the trust… placed in it,” Dieter Kempf, head of the Federation of German Industry (BDI) told a Berlin conference.

Instead of action, the government stood for “faint-hearted implementation of piecemeal social policies and an unhealthy level of redistribution,” Kempf added.

He pointed to last month's European elections, which saw the two traditional mass parties punished by voters and the rise of environmentalist Greens, who doubled their share from the last EU polls to just over 20 percent.

“The coalition has lost a lot of people's support, including from business and the younger generation,” Kempf expanded in a statement.

While the BDI boss repeated longstanding calls for tax cuts to increase German competitiveness, he said “companies are waiting for answers” especially on climate policy.

Successive Merkel governments have struggled to balance a planned withdrawal from nuclear power by 2022 with winding down the use of fossil fuels like coal and building up a new electricity infrastructure.

Merkel — in office since 2005 — is battling to hold her coalition together after SPD leader Andrea Nahles unexpectedly quit on Sunday, opening questions over whether the centre-left will continue propping up the chancellor.

But Germany's leader did not shrink from firing a salvo of her own back at the car industry as she followed Kempf at the podium.

Since the coalition was formed in March 2018 “I haven't counted up how many hours I've spent on the loss of trust in the car industry” over harmful emissions from diesel engines, Merkel said.

“We have a joint responsibility. Trust in the federal government is important, but trust in industry is also important,” she added.

“We can only manage this together.”