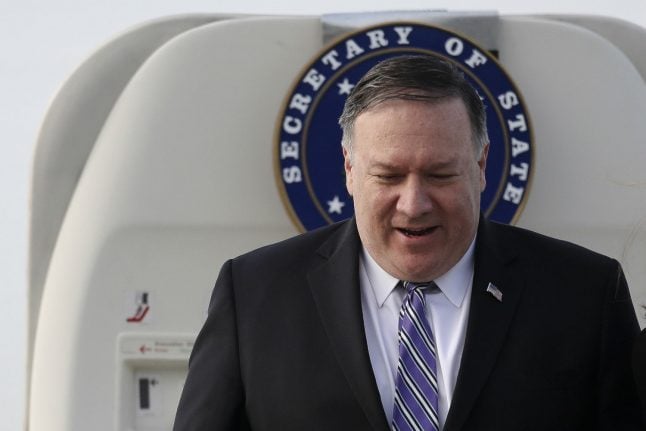 Secretary of State Mike Pompeo flew to Germany Thursday to make up a visit he canceled at the last minute in early May to the close US ally, which has rocky relations with President Donald Trump.

Germany will be the first stop in a four-nation tour of Europe in which Pompeo will also visit Switzerland and the Netherlands before joining Trump on his state visit to Britain.

In Berlin on Friday, Pompeo is scheduled to meet German Foreign Minister Heiko Maas and Chancellor Angela Merkel after he abruptly postponed talks with them on May 7th.

Pompeo, on his previous tour of Europe, took a major detour to visit Iraq to discuss security as tensions rose sharply between the United States and Iran.

Trump has repeatedly clashed with Merkel, taking her to task for Germany's welcome of migrants, in open criticism that would have barely been imaginable from a US president before the real estate mogul's surprise 2016 election.

Merkel, in the United States on Thursday to deliver a commencement address at Harvard University, leveled thinly veiled criticism of Trump as she deplored “walls” and “lies described as truth.”

She also called on the world to do all “humanly possible” to combat climate change — an issue which Pompeo calls a low priority.

Differences on Iran — or cooperation?

Germany, among other European allies of Washington, is skeptical of the hardline US approach to Iran and favors a 2015 agreement, from which Trump withdrawn, on curbing Tehran's nuclear program.

After weeks of escalating tensions in which the United States deployed an aircraft carrier strike group and nuclear-capable bombers to the region, Trump has moved away from his more hawkish advisers by saying he wants talks with Iran.

Pompeo has said that the United States has channels to communicate with Iran. While he has not revealed details, Switzerland — his second stop on the trip – handles US interests in Iran in the absence of diplomatic relations between Tehran and Washington.

Speaking to reporters as he flew out, Pompeo said that the United States always had “lots of issues with Germany” and that “Iran will be just some part of that conversation.”

Germany has been a key partner of the United States in Afghanistan, where Trump is seeking to withdraw US troops after nearly two decades of fighting.

But the allies also have major differences with Germany defying US warnings to build Nord Stream 2, a major new natural gas pipeline with Russia that would bypass Ukraine, where Moscow backs separatists.

Germany has also refused to follow the US lead on banning Chinese telecom company Huawei from developing fifth-generation technology amid Washington's concerns that the firm will jeopardize security and privacy due to its government ties.

“Everywhere I go, we talk about the opportunities and challenges that China presents not only to the United States and its security but to countries around the world,” Pompeo said.

A US official said that Pompeo would address Huawei and say that allies' choices on telecom networks have “a direct bearing on our mutual national security.”