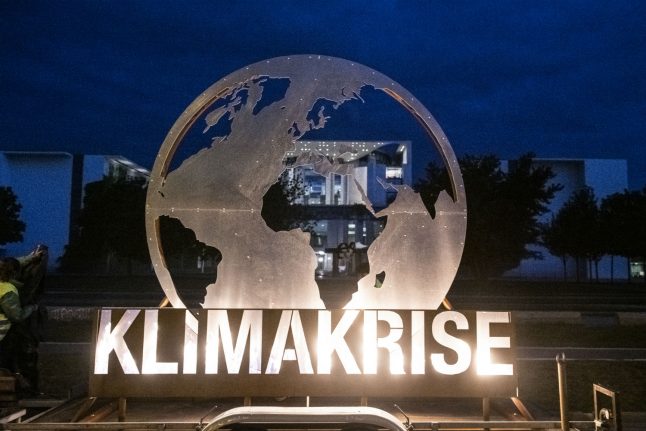 Merkel's coalition took heavy losses in Sunday's European Parliament elections at the hands of the ascendant Greens in what was seen as an indictment of Berlin's plodding progress on tackling global warming.

Young voters in particular — energized by the Fridays for Future school strikes, anti-coal protests and a passionate campaign from leading YouTube stars — abandoned the mainstream CDU/CSU and SPD parties in droves.

Environmental groups demand that Germany fast-forward its phasing out of dirty coal, currently targeted for 2038, and better promote zero-emission cars that remain a rare sight on German roads.

Merkel, who acknowledged on CNN that “we have to give better answers” to the planetary challenge, met ministers of her “climate cabinet” Wednesday to discuss how Germany should meet its carbon reduction targets.

Afterwards, Merkel's office reaffirmed Germany's intention “to meet the 2030 climate targets to which it has committed itself internationally” – a 55- percent cut in emissions from 1990 levels.

“This means significant additional CO2 reductions year after year,” said her spokesman Steffen Seibert, stressing that Merkel's government “sees this as a key focus of its work”.

“The government will in September make the fundamental decisions on the laws and measures and the cabinet will adopt them by the end of the year,” he added.

SEE ALSO: 'Surfing the Zeitgeist': How the Greens won over Germany In 2007, Merkel sits on stones in front of the Eqi Glacier in Greenland. Photo: DPA

Since the election, criticism has been raining down from all sides — even from Friedrich Merz, a conservative former investment fund manager with designs on Merkel's job.

“After this European election, the CDU must ask itself why, after 14 years of having a 'climate chancellor', we are missing our climate targets, burdening households and companies with the highest electricity prices in Europe and at the same time losing strategic and cultural control over the issue,” he told news site Der Spiegel.

SEE ALSO: German electricity prices could rise by 20 percent due to coal withdrawal

The coalition's poll debacle and perceived loss of touch with young voters have again heightened tensions between the two parties who were forced into their unhappy marriage by poor poll results in 2017.

The new political turbulence has also added fresh urgency to the coalition's plodding progress on forging a complex new “climate law” before the end of the year.

A day after the ballot box drubbing, the SPD Environment Minister Svenja Schulze voiced her frustration about the CDU's foot-dragging on her climate bill.

She complained that Merkel's office had failed to respond to the proposed law since February and took the unusual step of instead sending the bill directly to other ministries.

“We need more commitment on climate protection,” she tweeted. “I cannot take responsibility for further delays.”

The CSU's Georg Nüßlein attacked Schulze for her “panic-driven manoeuvre” and charged that “the SPD is obviously losing its nerve, which is little wonder given its election results”.

And by mid-century, Germany would aim for a 95-percent cut under the new law, surpassing earlier pledges.

Where Germany fails and is punished at the EU level, the government would pass the penalties on to the ministries responsible.

The CSU's Nüßlein has already attacked the bill as a blueprint for a communist-style “climate-planned economy”.

He also opposed SPD proposals for a CO2 tax that would discourage, for  example, petrol cars and oil heating.

The CDU's Joachim Pfeiffer meanwhile voiced scepticism about the new  enthusiasm for climate protection, charging that for many it had become a  “substitute religion”