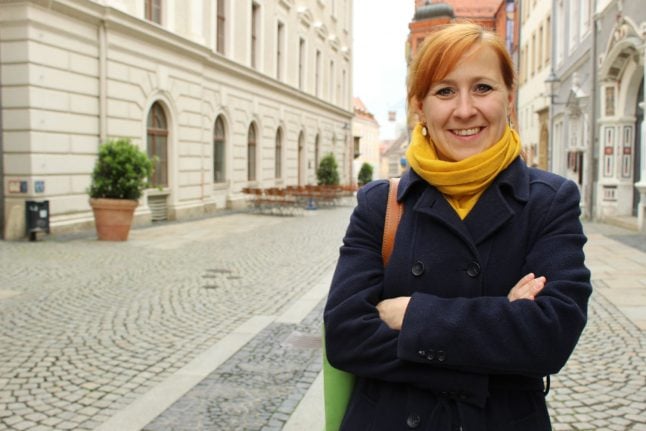 Many people all around the world have seen Görlitz – even if they don’t realize it. Often dubbed “Görliwood”, the charming east German border city has been the filming location of several blockbuster films, including 'The Grand Budapest Hotel' and 'Inglorious Basterds'.

But most recently the city of 56,000 inhabitants has been capturing headlines for its far-right Alternative for Germany (AfD) candidate for mayor, Sebastian Wippel. Many feel that the 36-year-old police superintendent is poised to become the first AfD mayor in Germany in Sunday's elections.

SEE ALSO: Is Germany about to elect its first far-right AfD mayor on Sunday?

Yet among Wippel's campaign posters plastered around the city can be seen those for another young and fresh face: 37-year-old Franziska Schubert. The Green Party candidate says she wants to offer another, more inclusive alternative to Görlitz residents who have become disenchanted with mainstream politics.

“Görlitz is a beautiful, European city,” Schubert, a member of Saxony’s parliament, tells The Local. “It deserves to have a friendly, open-minded image. With an AfD mayor from the right, we will lose people, students, enterprises and reputation.”

Called the “Europastadt” (Europe City), Görlitz straddles a strategic location between East and West, with a bridge over the Neiße river connecting it to its Polish sister city of Zgorzelec.

The city is a popular tourist spot, boasting over 4,000 historically listed buildings in an Altstadt (old town) that feels like an outdoor museum. Filled with low-priced flats, it's often marketed as a retirement spot for pensioners from western Germany.

But Schubert – who grew up in nearby Neugersdorf and studied demographic change in former East Germany – sees the city’s potential for attracting and retaining younger residents, too.

As Görlitz has a lot of empty buildings and unused space, Schubert says she would like to create a model project within an empty house to “bring together young designers and arts.”

“We have to increase the number of start-ups and I’d like to help with such a model project to raise those businesses who are looking for opportunities.”

She also wants to invest in the city’s tram system and boost the use of bikes, in part via a bike-sharing programme. “The future does not belong to the individual car driving,” she says. Tessa Enright, 34, an American living in Görlitz, says that her city holds a lot of promise for people “who are creative and have ideas”.

Enright, who runs a travel website about Görlitz and the region, says the city’s old town and her own neighbourhood of Nikolaivorstadt already boast a lot of younger residents living in them.

When Enright and her husband arrived in Görlitz in 2016 from the state of Arizona, she started a club for English speakers, skeptical that anyone would show up.

“But now we regularly have 10-15 people attending our meetups,” Enright tells The Local, “and are constantly meeting new people who are moving to Görlitz from all over the world.”

Görlitz residents are going to the polls, starting at 8am on Sunday, the same day that people around Europe are casting their vote in the EU elections. For Schubert, Görlitz is a “real European city” brimming with potential.

Schubert, who studied international relations in Budapest for a year in 2004-2005, has made better connections with Görlitz' sister city of Zgorzelec a part of her campaign. She and Zgorzelec’s mayor have discussed several cross-border projects that they would like to undertake together. They have already set up a joint project for biking tourism and want to cooperate more intensively on cultural projects.

“This city is not a complete one,” Schubert says. “It is waiting for people who want to create something, who are searching for freedom, who want to live in a lovely, European city with low-price flats.”

A growth in Greens

While former East Germany has seen a rise in the right in recent years, there's also been an up-shoot in members of Schubert's party, The Greens. In Saxony, membership spiked by 23 percent in 2018 compared to the previous year.

Throughout eastern Germany, the proportion of women, traditionally higher in among the Greens than other parties, also rose slightly, by 39.8 to 40.5 percent. The average age countrywide also dropped slightly from 49.5 to 49 years.

Federal managing director Michael Kellner told daily Die Welt in February that the increase was a response to the increasing popularity of the Alternative for Germany (AfD).

“The emergence of AfD and Pegida has shaken people awake,” he said. “They want to commit themselves to democracy and openness to the world.”

In Görlitz, that increase is particularly pronounced. The far-right populists in Görlitz won 32.9 percent of the votes in the Bundestag (parliamentary) elections in 2017 and were six percentage points ahead of the Christian Democrats (CDU).

In a recent poll on the current mayoral elections, AfD candidate Wippel came in second place behind CDU candidate Octavian Ursu, 51, and ahead of third-place candidate Schubert. Yet a third of voters remained undecided going into Sunday.

Schubert says that many people in Görlitz grew increasingly frustrated after the fall of the Berlin Wall.

“Görlitz was kind of forgotten during the last decades,” she says. Some restoration was done, “but was never in the focus of politics in Saxony.”

Feeling that the politics of the CDU weren’t improving their quality of life – or pushing it to the contrary – many were drawn to the AfD.

“People in Görlitz have had some bad experiences with changes since the Fall of the Iron Curtain,” says Schubert. “Showing how change can be managed is my offer.”