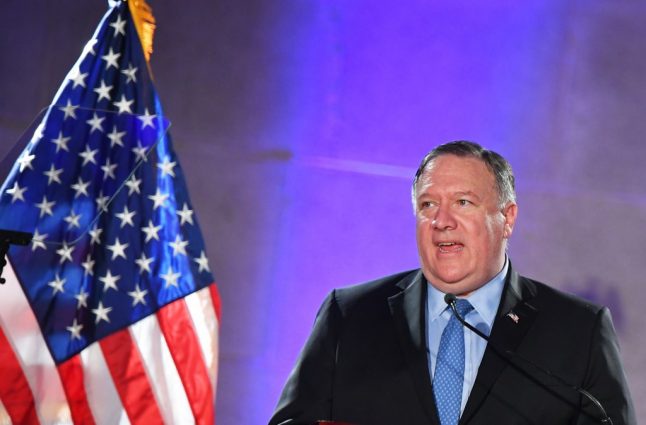 US Secretary of State Mike Pompeo. Photo: MANDEL NGAN / AFP
The top US diplomat will also visit Switzerland, The Netherlands and Britain during the May 30-June 5 trip.
Pompeo had been scheduled on May 7 to meet German Chancellor Angela Merkel in Berlin but instead made a detour for a day trip to Iraq, where he warned of threats from neighboring Iran amid a concerted US pressure campaign.
The State Department said that Pompeo would meet Merkel and Foreign Minister Heiko Maas in Berlin on the first stop of the latest trip.
Germany and other European powers are uneasy with President Donald Trump's hawkish line on Iran and continue to support a multinational denuclearization deal negotiated under his predecessor Barack Obama.
Trump has had rocky relations with Merkel, whom he has openly criticized over her welcome to migrants.
Pompeo will join Trump on his state visit to Britain, which will take place under the shadow of political chaos after Prime Minister Theresa May's resignation Friday as she failed to negotiate the terms of the country's divorce from the European Union.
Pompeo will take part in an international conference on entrepreneurship in The Hague and meet with the head of the World Health Organization, Tedros Adhanom Ghebreyesus, in Switzerland.
The bilateral meetings in Switzerland will also likely include discussion on Iran as the neutral nation takes care of US interests in the Islamic republic in the absence of diplomatic relations between Washington and Tehran.