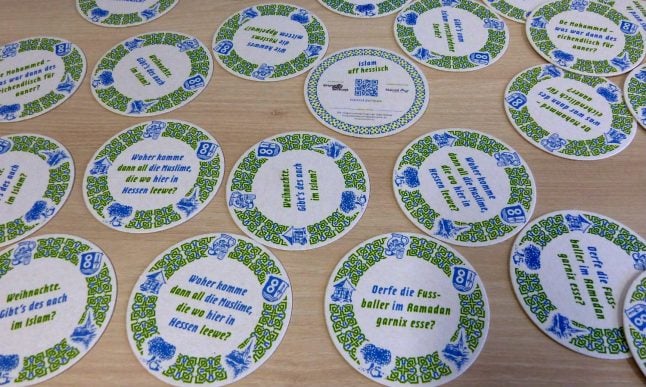 Beer mats with questions about Islam in the Hessian dialect on a table. Photo: City of Maintal/DP

The mats feature questions about Islam in the Hessian dialect and are intended to spark discussion about the religion among locals.

But the local Foreigners’ Advisory Council says it was the wrong decision to use beer mats to carry the campaign message – because many Muslims refrain from drinking alcohol as part of their religion.

The city in the Main-Kinzig district has distributed 5000 coasters in restaurants since the end of January as part of its campaign “Islam uff Hessisch” (Islam in the Hessian dialect).

The cardboard mats feature questions about Islam such as “Derfe die Fußballer im Ramadan garni nix esse?” which translates roughly to “Are footballers allowed to eat anything during Ramadan? and “De Mohammed – was war denn des eichendlich für aaner” (Mohammed, who was that guy?).

Some of the mats also include cider jugs, a symbol of the region known for its Apfelwein.

Those who are interested in finding out the answers can use a QR code or link on the mat to get to the web page. On the web page users will find a fictional character who shares the answers and talks about everyday life using a regional dialect.

'Not a good idea'

The Integration Network in Maintal wanted to spark discussion about Islam. And although the Foreigners’ Advisory Council said it backed the content and the idea of promoting inter-religious dialogue, it has raised concerns over the coasters.

“This was not a good idea, they messed it up,” said Salih Tasdireck, chairman of the council, according to German daily FAZ.

Tasdirek, who has been living in Germany for almost 40 years, asked why another medium wasn’t chosen to carry the questions, reported Spiegel.

“One could have made a promotional postcard, or bus advertisement, why does it (the campaign) have to go to the Kneipe (pub)?” he said.

However, Tasdirek added that he thought the idea behind the beer mats was good.

But he also said that answers to the questions could have been included in case people do not take the time to find the answers online. However, the organizers behind the project said there isn't enough space to do that.

Verena Strub, the city's integration commissioner said the inclusion of the cider jug on some of the coasters does not stand for alcohol; it is rather a symbol for the region.

The aim is to bring people together, she said. “I believe that there is a lot of misunderstanding and prejudice circulating.”

Tens of thousands of coasters

The “Islam in…” project was launched by the Freiburg Orient-Netzwerk association.

They wanted to spark discussion using a humorous approach to answer frequently asked questions in local German dialects, according to Raban Kluger, who is behind the campaign.

Tens of thousands of coasters have been printed since 2016 in states including Hesse, Saxony and Baden-Württemberg. The aim is to roll it out across Germany, including with different religions.

The answers – as well as the questions – were developed by a group of Islamic academics. 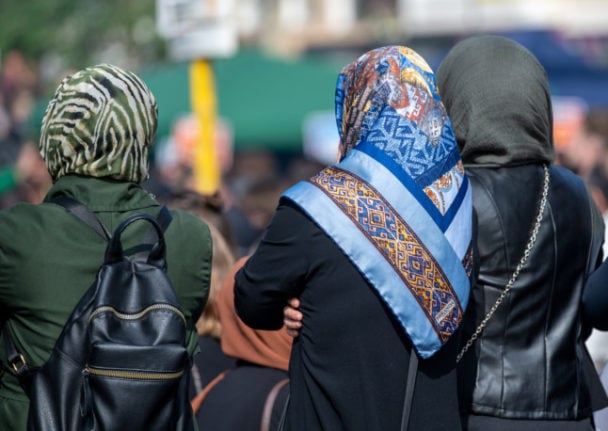