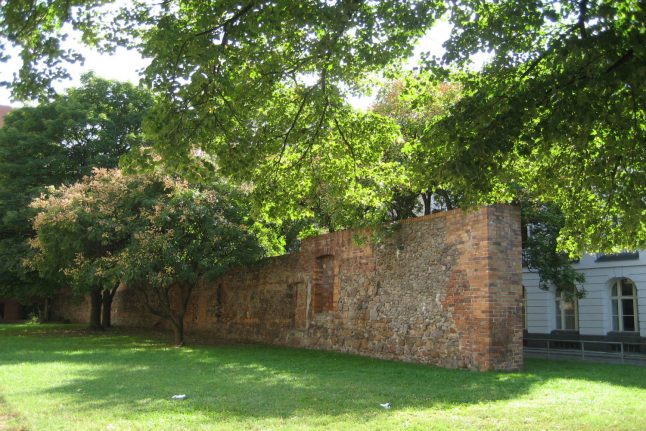 The original Berlin Wall as seen on the 775's anniversary of Berlin in 2012. Photo: Jorge Gutiérrez Arias

This November will mark 30 years since the Berlin Wall – which divided East and West Berlin for more than 25 years – fell. But Berlin is a city which has been surrounded by walls since its very beginning, as I surprisingly first noticed on a short walk away from the capital’s bustling Alexanderplatz.

Alexanderplatz, dotted with drab communist high rises and more modern capitalist chain stores, is not an area blessed with beauty. Yet nearby Nikolaiviertel (St. Nicholas' Quarter), where Berlin had its beginnings in the 13th century, and its quaint side streets is a different story. A history festival in 2008 took showed visitors to Nikolaiviertel how people in the district dressed in the 18th century. The area itself has been around since Berlin's foundings in the Middle Ages. Photo: DPA

Standing on Littenstraße just down the road from the city’s oldest running restaurant (Zur letzten Instanz, dating back to 1621) you’ll spot a striking reddish-brown stretch of wall comprised of lime mortar, field stones and brick.

This 150 metre remnant is all that’s left of Berlin’s former 2.5 kilometre Stadtmauer (city wall), which once protected it and its sister city Cölln. The city walls ran north where the S-Bahn now travels, and to the south stretched along the Spree.

Archeologists at various times have discovered underground remains of the wall – mostly large stones and piles that supported them in swampy areas.

The Littenstraße remains were brought to light in more modern history history, as they were discovered amongst wartime ruins in 1948 and made a landmark. An old map of Berlin and its sister city Cölln. The two sister cities were divided by the Spree and surrounded by a Stadtmauer, or city wall. Photo: Wikicommons/Verein f. d. Geschichte Berlin 1888.

Exploring Nikolaiviertel and its surroundings

The official founding of Berlin-Cölln dates all the way back to 1237. An official city until the 18th century, Cölln was the twin city to Altberlin (Old Berlin) – today encompassing an area adjacent to Alexanderplatz, including Nikolaiviertel and several streets which give hints about history such as Judenstraße (Jewish street, the location of the former Jewish quarter) and Klosterstraße (Monastery street, where you’ll find remnants of a 13th century Franciscan monastery) .

Berlin’s Breite Straße (Wide Street), which runs through the Nikolaiviertel and scenically cuts across the Spree, used to be the main drag of Cölln – then running all the way to the city’s Schloss, or palace. In the 13th century it was lined with half-timbered houses of merchants and not surprisingly was the city’s core trading route.

Nikolaiviertel’s centrepiece is the Nikolaikirche (St. Nicholas’ Church), a still-standing church which was turned into a beer hall by the Nazis, was bombed by the Allies, rebuilt by the Soviets and today officially categorized as a museum. A nearby placard bears, well, two bears – the town seal of Berlin-Cölln as of 1280.

Berlin’s second oldest church, Marienkirche (St. Mary’s Church), is located only a short walk away, and is an anachronistic contrast to Berlin’s tall TV Tower in the background. The red-brick church also suffered massive damages during World War II, and was restored by East German authorities in the 1950s. A striking statue of Martin Luther, holding an open book in hand, sits in front. Ancient and modern unite: Marienkirche and Alexanderplatz can be seen in the same view. Photo: DPA

The Judenstraße just outside of Nikolaiviertel pays homage to the Middle Age Jewish community which lived in Berlin-Cölln, and whose merchants were among its earliest founders. The Große Jüdenhof (Big Jewish courtyard) was purposely built away from the street so that Jews could live their community and religious lives undisturbed, say historians.

By 1400, Berlin-Cölln counted 8,500 inhabitants and 1,100 buildings – including three town halls, churches, and several monasteries. The remains of one of those monasteries (Graues Kloster, a Franciscan monastery) can still be seen just down the road from the Medieval Wall, and right at the U-Bahn stop Klosterstrasse, one stop away from Alexanderplatz on the U2 train. Built in the 14th century, the Franciscan monastery – where the then ruling Margraves once confessed their sins – remained intact until it was partially destroyed in air raids during World War II. The skeletal yet stark structure towers next to a barren park filled with figures paying tribute to victims of war.

Starting in the 18th century, the ancient Stadtmauer stopped being used to mark the border of Berlin. Instead a so-called “excise wall” was built in order to levy tariffs on goods and services both entering and leaving the growing city.

To this day, traces of this wall also stand. Berlin’s U-Bahn stations with “Tor” (Gate) in their name, such as the waterside Schlesisches Tor or Hallesches Tor in today’s Kreuzberg, are lingering pieces of the customs wall which once stood by those stations.

The Schlesisches Tor station in 1902, when the German spelling for Tor (Gate) was Thor. Photo: DPA

By 1870, the city wall and most of the gates were torn down. Of the three left standing, two were completely destroyed during World War II. The only one which remained was the Brandenburg Gate, which bordered the eastern and western part of the divided city after the war. Remains of the wall can still be found next to the Brandenburg Gate.

Today the Brandenburg Gate is most famously associated with the fall of the Berlin Wall, and it is the spot where thousands of people gathered on November 9th, 1989 to celebrate the end of a divided Germany, and Europe.

In fact the Gate remains the capital’s symbol of peace and reunification – and the end to the last of the walls that a once-divided city would no longer see.