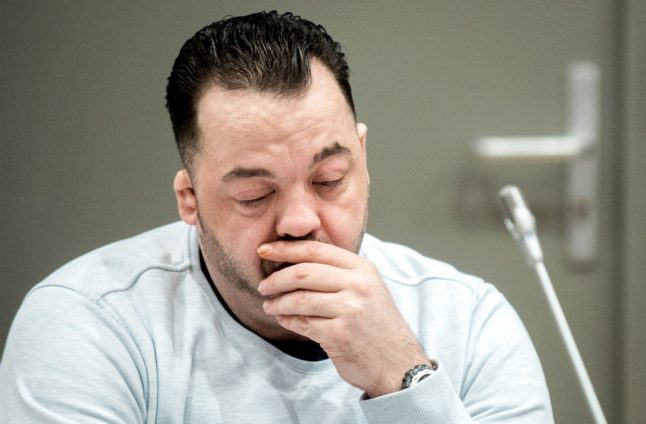 Niels Högel, 42, who is already behind bars for six killings, has confessed to giving scores of other intensive-care patients drug overdoses because he enjoyed the thrill of trying to reanimate them at the last moment.

He was accused of a revised toll of 97 murders, said prosecutor Daniela Schiereck-Bohlmann, as three initial cases could not be proved.

Some investigators, however, believe Hogel may have killed hundreds more by injecting them with deadly drugs between 2000 and 2005 at clinics in the cities of Oldenburg and nearby Delmenhorst.

But because the deceased were buried or cremated long ago, autopsies have not been possible in all suspicious cases, and in some the post mortem examinations were inconclusive.

During his new trial since October, the heavy-set and bearded defendant has admitted to 43 killings, denied five and not ruled out 52 others, saying he could not remember.

Schiereck-Bohlmann said that clarity was needed on each death because “just calling him 'the worst serial killer in history' isn't enough to convict him”.

Prosecutors say Högel was motivated by vanity, the desire to show off his skills at saving human lives, and by simple boredom.

Some colleagues had reportedly nicknamed him “Resuscitation Rambo”.

Psychologists testifying in court said Högel suffers from a narcissistic personality disorder but could be considered fully culpable for his crimes.

At the start of his trial he apologized to the families of the victims who were aged between 34 and 96.

“If I knew a way that would help you, then I would take it, believe me,” he said. “I am honestly sorry.”

Caught in 2005 while injecting an unprescribed medication into a patient in Delmenhorst, Hoegel was sentenced in 2008 to seven years in prison for attempted murder.

A second trial followed in 2014-15 under pressure from victims' families.

He was found guilty of multiple cases of murder and attempted murder and given the maximum sentence, life imprisonment.

It was then that Högel confessed to his psychiatrist to dozens more murders at Delmenhorst, which prompted a far wider probe.

More than 130 bodies of patients who died on Högel's watch were exhumed in Germany, Poland and Turkey in a case investigators called “unprecedented in Germany”.

Aside from the monstrosity of the killing spree, the Högel case has raised deeply troubling questions about how the hospital hierarchies failed to stop him for so long.

Statistics show that patient deaths, as well as the use of certain cardiac dugs, soared while Högel was on duty.

Several doctors and head nurses were later charged with manslaughter for failing to stop the killer nurse.

In the current trail, presiding judge Sebastian Buehrmann has ordered perjury investigations against some of Högel's former colleagues on suspicion they withheld evidence.

When the Oldenburg hospital encouraged Högel to resign in late 2002, it offered him a glowing letter of reference to ensure he left.

Högel later testified he was never explicitly told why the hospital wanted him gone but that the request made him feel as though he “had been caught”.

“Without the mistakes of some people in Oldenburg… this series of murders by Niels Högel could have been stopped,” Christian Marbach, whose grandfather was one of the victims in Delmenhorst, told AFP last year.

The verdict is scheduled for June 6th.