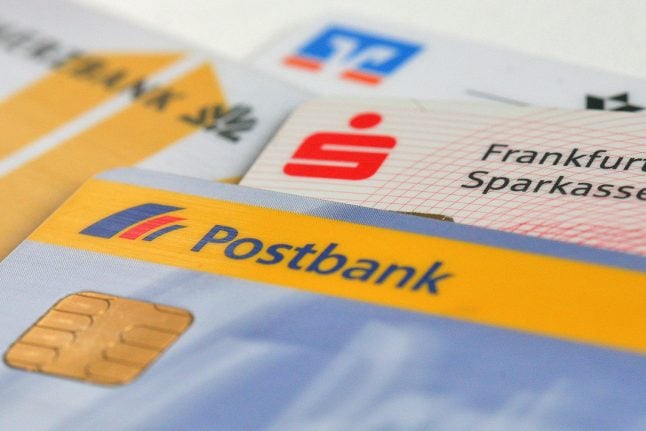 A close up of German bank cards. Photo: DPA

Germany is home to a relatively diverse variety of financial institutions, with more than 1,700 banks operating over 30,000 different branches. However, despite your likely proximity to a bank no matter where you are in the country, opening an account is not as easy as you might expect.

From the difficult vocabulary to getting a handle on the documents you’ll need as you apply – along with just picking which bank to go with – finding a place to stick your hard-earned cash (or lack thereof) can be tough.

First things first, do you need to be in Germany to open an account? By and large, all German banks will need you to be either in Germany or have a German address in order to register.

Some online banks such as N26 will allow you to open an account with an address elsewhere in Europe, although people from outside the EU are likely to be restricted.

Whether they’ve discussed the Anmeldung service or getting a blue card to live and work in Germany, there’s been one constant in all of our tips articles: paperwork.

READ: How to get a blue card in Germany

German authorities love paperwork and they want you to love it too. The downside is that you’ll need to locate several different documents, but the upside is that once you’ve done so, your application is likely to be approved.

While the specific paperwork is likely to differ from bank to bank, each application is likely to involve some variation of the following:

– Your Meldebescheinigung (certificate of registered address in Germany – Anmeldung);

– An initial deposit (which will vary from bank to bank);

Some banks allow online applications, while others will want you to show up in person. So-called ‘online accounts’ have become more popular in Germany in recent years as they often offer a greater degree of flexibility and lower account keeping fees.

Many online banks, however, will not have bricks and mortar branches, which can make dealing with the bank a little more difficult.

A Schufa is your German credit rating score. As we discussed in our guide, it represents something of a Catch-22 situation. Deposits in German bank accounts are protected by the government up to €100,000 per account. Photo: DPA

If you don’t speak German, opening a bank account in English can be difficult – although this is slowly changing.

Most large German cities will have customer service staff who speak enough English for you to open an account.

Most of the documents however will be in German. While staff will explain it to you, official translations are rare due to fears of legal implications.

Once you’ve opened your account, dealing with your bank in English can be difficult. Some such as Deutsche Bank or N26 have English options on their internet banking platforms, with others slowly seeing the value in doing so.

While we encourage you to learn German as soon as you can, some of the vocabulary can be pretty impenetrable – so an English option is always handy.

We've placed a guide to bank vocab at the bottom of this article.

Every bank will need to see your ID or a copy of your ID when opening it up.

Passports are generally required for all non-EU applicants. For those from elsewhere in the EU, some banks will accept official EU identification, but passports are always preferred.

When opening a bank account online, you may need to complete a Postident ID confirmation. This process is relatively straight forward – but you will need to have your ID close at hand.

Depending on where you come from, account keeping fees for bank accounts may be a normal part of life or a complete surprise.

Generally speaking German banks will charge between €3 and €5 per month in account-maintenance fees, although others like N26 will not. Students can apply for a so-called Kontoführungsgebühren, which is an exemption from paying bank fees.

People who receive a regular wage may be eligible for a fee exemption.

Plastic fantastic: What cards are available in Germany?

The ‘cash card’ option in Germany which links to your regular savings account is called an ‘EC Card’ on the Maestro network. This will give you access to your money, although occasionally you will be able to negotiate an overdraft limit (Dispositionskredit) with your bank. ATMs can be hard to come by in Germany. Photo: DPA

Then there’s credit and debit cards. Debit cards work through your bank and one of the big providers like MasterCard or Visa, giving you access to your money but allowing you to pay as if it were a credit card.

By and large German credit cards work the same as they do elsewhere, although the way they handle debt is different.

Unlike credit cards in other countries, which have a minimum monthly payment but allow you to rack up debt upon debt month after month, German credit cards require you to pay the amount that you’ve spent back at the end of the month.

Not only is this ‘required’, but it will be direct debited (SEPA-Lastschrift) from your account at the end of the month.

This is a far more responsible way to handle credit cards and reflects Germans’ attitude to debt, although it can be surprising for internationals who have been accustomed to going deeper into the red.

Which bank should I go with?

Before you actually go through the process of opening a bank account, you'll want to choose a bank.

There are several options to you should you wish to open a bank account in Germany, meaning you might have a difficult choice to make.

Of course there’s no right or wrong answer – it will depend largely on your personal circumstances, what you need from your bank and where you live.

One of the most important considerations with choosing a bank is getting at your money. While some banks will have plentiful ATMs, others will not.

It remains one of the more puzzling contradictions that in modern Germany, where card payment is rarely accepted, more ATMs have not been installed to pick up the slack.

Even in major German cities like Berlin, Frankfurt and Hamburg, ATMs for many of the major banks are hard to come by.

This can mean significant costs to withdraw your own money by using competitor ATMs, or having to travel a long way to get access to your cash.

Some banks will let you use competitors’ ATMs for free. Deutsche Bank, Post Bank, Commerzbank and HypoVereinsbank are all part of the Cash Group, which give customers of one free withdrawals at another. Choosing the right bank is an exercise in research. Photo: DPA

Sparkasse on the other hand has the most ATMs in the country, meaning access to your money SHOULD not be so far away.

Online banks like N26 and Comdirect don’t have branches in the traditional sense, meaning that withdrawals can be made from any ATM.

As we discussed in our Anmeldung advice article, the German address registration paper is essential when trying to do anything official – which includes opening bank accounts.

(While we have heard from some of our readers that they were not asked to produce their Anmeldung when signing up, this is rare. Simply hoping not to be asked is not a good strategy to get around not having an Anmeldung).

Recently, however, there have been some changes in the status quo re: banking in Germany. A couple of new, start-up banks have come onto the scene and do not require an Anmeldung to start an account.

Both N26, ING DiBa Comdirect both do not require an Anmeldung.

They do require you to provide a German address, however proof of that address is not needed – with some people using their work address or that of a friend.

One account that can be opened without an Anmeldung – or even an address. Photo: DPA

There are also some limited options from the big banks if you don’t have an Anmeldung.

Deutsche Bank offer what’s known as a Sperrkonto (blocking account) for students, which only allows a certain amount to be withdrawn each month. Occasionally the Ausländerbehörde will require that student accounts are blocked, so that they will be sure to have enough money to last them a full year.

These accounts will be available without an Anmeldung, although you will need to be a valid student to do so.

This piece has been written independently to provide advice to foreigners in Germany and is not written in support of any bank or financial institution.

Navigating the complex process of dealing with German banks can be difficult enough, even without having to know all of the complex vocabulary. Here are some terms that you might find to be valuable.

A woman walks past the offices of Deutsche Bank in London. Photo: Tolga Akmen / AFP
The bribery case relates to illegal payments and to false reporting of those sums on the bank's books and records between 2009 and 2016, the Department of Justice said in a press release.
The bank “knowingly and wilfully” kept false records after employees conspired with a Saudi consultant to facilitate bribe payments of over $1 million to a decision maker, the DOJ said.
In another case, the bank paid more than $3 million “without invoices” to an Abu Dhabi consultant “who lacked qualifications… other than his family relationship with the client decision maker,” the DOJ said.
In addition to criminal fines and payments of ill-gotten gains, Deutsche Bank agreed to cooperate with government investigators under a three-year deferred prosecution agreement.
In the commodities fraud case, Deutsche Bank metals traders in New York, Singapore and London between 2008 and 2013 placed fake trade orders to profit by deceiving other market participants, the DOJ said.
The agreement took into account Deutsche Bank's cooperation with the probes, DOJ said.
“Deutsche Bank engaged in a criminal scheme to conceal payments to so-called consultants worldwide who served as conduits for bribes to foreign officials and others so that they could unfairly obtain and retain lucrative business projects,” said Acting US Attorney Seth D. DuCharme of the Eastern District of New York.
“This office will continue to hold responsible financial institutions that operate in the United States and engage in practices to facilitate criminal activity in order to increase their bottom line.”
“We take responsibility for these past actions, which took place between 2008 and 2017,” said Deutsche Bank spokesperson Dan Hunter, adding that the company has taken “significant remedial actions” including hiring staff and upgrading technology to address the shortcomings.
SHOW COMMENTS 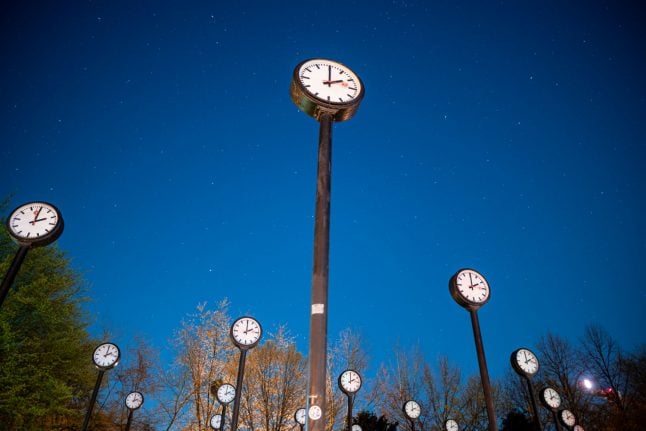 PENSIONS
Everything that changes in Germany in July 2020 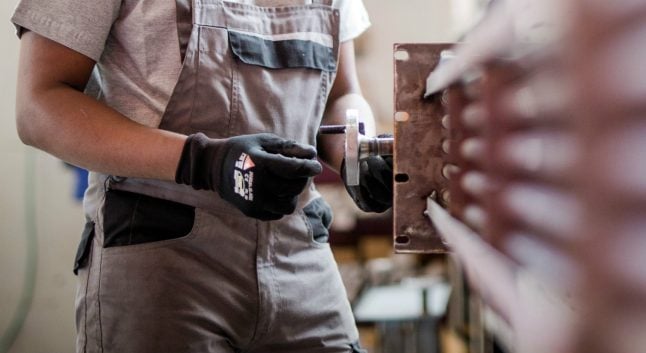