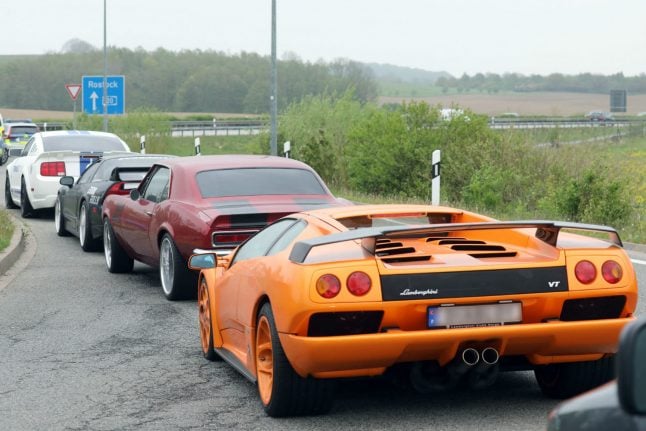 Some of the cars that were seized. Photo: DPA

The 122 cars, including Audis, Lamborghinis, Ferraris and Porsches were stopped on Thursday on the A20 east of Wismar, in the north of the country.

Police told German daily Bild that authorities were investigating whether the event could be categorized as an illegal race. The alarm was raised after other drivers on the road noticed the sports cars travelling at speeds of more than 250km/h, reported local media.

Most of the cars had stickers with the name of the event they were thought to be part of: Eurorally.

According to the Eurorally website, the event costs up to €799 to enter and consists of four legs, starting in Oslo and ending up in Prague. The second leg, on Thursday, took drivers from Kiel in Germany to Szczecin in Poland. The website’s terms and conditions state that Eurorally is “not a competition” but merely a “holiday planner for car enthusiasts”.

Police caught up with the cars at a service station in Fuchsberg, between Wismar and Rostock.

A total of 50 police officers and two helicopters were involved in the operation. There were no reports of accidents.