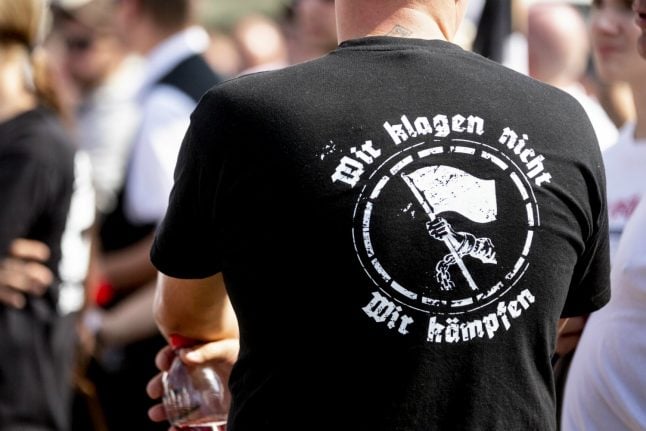 'We don't complain. We fight' is written on the T-shirt of a participant at a neo-Nazi demo in Berlin in 2018. Photo: DPA

In 2017, around 24,000 far-right extremists were known to security officials – and 12,700 of those had a tendency towards violence, the Interior Ministry said.

The ministry was responding to a parliamentary question put to them by the pro-business Free Democrats (FDP).

The group of violent extremists also included members with an “affinity for weapons”, according to the ministry.

The government has also been investigating the most common ways of communication between groups. It found far-right extremists have been increasingly using the Internet to communicate with each other, particularly via social networks and messaging services, according to the report.

Konstantin Kuhle, spokesman for domestic politics for the FDP parliamentary group in the Bundestag, told regional newspaper, the Neue Osnabrücker Zeitung, that a “new approach to tackle radicalization on the Internet” was necessary.

Germany has long battled extremism in all forms.

As The Local previously reported, counselling centres for victims of far-right violence reported an increase in crime in the five eastern German states and Berlin last year.

Meanwhile, according to the Federal Criminal Police Office (BKA), which coordinates state and nationwide police investigations, a total of 13 terror attacks linked to Islamic extremism have been prevented in Germany since 2010.