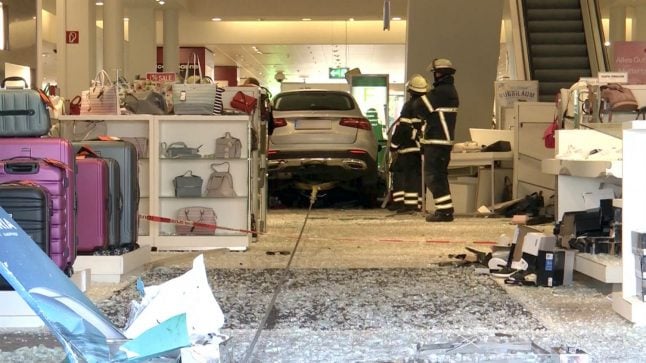 The car ploughed into the department store. Photo: DPA

However police said that there were no signs of a terrorist act.

The spokesman said police were treating the incident, which ended with the car coming to a stop in front of an escalator above an atrium – its front tyres precariously suspended in  mid-air – as an accident.

The 85-year-old driver and one other person were suffering from shock, police said.

The incident happened around 10.35am at Hamburg's largest shopping mall, the Alstertal-Einkaufszentrum, in the Poppenbüttel quarter. The driver apparently lost control of his Mercedes car, drove up a flight of five stairs, and then crashed through a glass door into Galeria Kauhof.

“For an unexplained reason, an elderly man drove his SUV through the main entrance of the mall before stopping right on the edge,” a spokesman for Hamburg firefighters told AFP.

Despite the drama in the Galeria Kaufhof store, no one was seriously hurt, the spokesman told AFP, adding that two people taken to hospital were not in serious condition.

“It could have ended much more dramatically — 50 centimetres (20 inches) further and the car would have fallen over the edge and we could have expected a lot more injuries,” a senior firefighter told German newspaper Bild.

As the dramatic pictures show, the vehicle smashed into the handbag and shoe department of the store, crashed through the railing next to an escalator where it finally came to a standstill above an atrium.

A fire brigade spokesman told Norddeutscher Runfunk: “There could have been casualties here” but that, luckily, “nobody was harmed”.

The shopping centre was evacuated while police investigated the scene. The probe has now been passed on to traffic investigators. The area was cordoned off while a huge clean-up got underway on Tuesday afternoon.