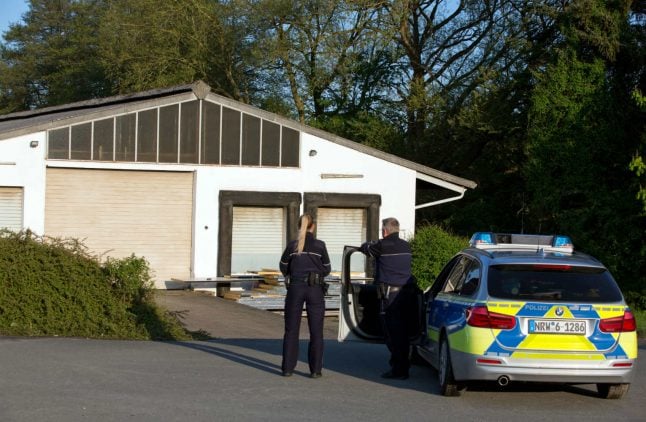 Police officers in the town of Preußisch Oldendorf, north of Bielefeld, stood guard outside the suspect warehouse on Monday, as investigators scratched their heads as to what the possible use of the dangerous substances could be.

A day earlier firefighters had discovered suspicious looking barrels during an operation at the address that had been triggered by a cable fire in the storage facility’s electric circuits.

Further inspection revealed that 35,000 litres of sulphuric acid, caustic soda and phosphoric acid were being illegally held in huge 1,000-litre barrels at the the 650-square metre unit. Some 50 propane bottles were also found at the site.

Experts trained in handling chemicals were set to arrive at the scene later on Monday to transport the chemicals to a secure location.

Two men were spotted fleeing the site in a large vehicle when firefighters arrived on Sunday. The warehouse’s owner has denied any connection to the crime, claiming that the legal tenant had sublet it to a third party without his knowledge.

Police have not yet given any further indication as to the suspected nature of the crime.

However, sulphuric acid and caustic soda are both used in the production of methamphetamines. The fact that the warehouse is located near the border to the Netherlands – a notorious hub in the production of chemical narcotics – is also likely to be more than just a coincidence.