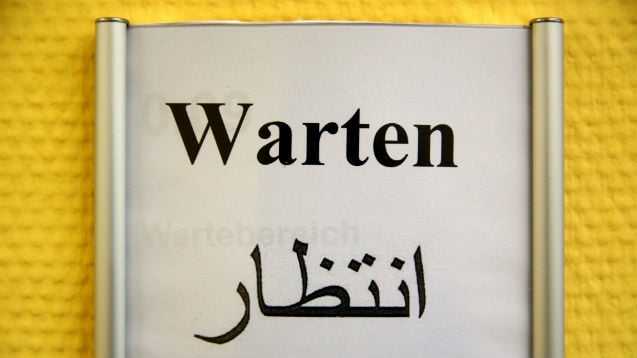 A sign in German and Syrian-Arabic points to the waiting room in a refugee ambulance in 2015. Photo: Jan Woitas/dpa
German media group Funke, quoting the interior ministry, said decisions on some asylum applications from Syrians have been 'postponed' with changes expected to be made to ministry guidelines.
Delegations from Iran, Russia and Turkey met in Kazakhstan on Thursday seeking an end to the Syrian conflict.
As a consequence of the Germany's halting of some asylum applications, refugee organisations fear Angela Merkel's government will reject more applications from Syria if there is no longer armed conflict there, say Funke.
According to the Funke report, those affected are asylum seekers awarded “subsidiary protection” — exposed to serious danger, acts of war, the death penalty or torture in their home country.
READ ALSO:
According to government figures, 17,411 Syrians were awarded the status in 2018.
Germany has been deeply polarised by Chancellor Angela Merkel's 2015 decision to open the country's borders to those fleeing conflict and persecution at the height of Europe's migrant crisis.
Since then, the influx of over a million asylum seekers — mainly from Syria, Iraq and Afghanistan — has fuelled the rise of the far-right, anti-Islam AfD party.
The civil war in Syria has killed more than 370,000 people and displaced millions since it started with the brutal repression of anti-government protests in 2011.