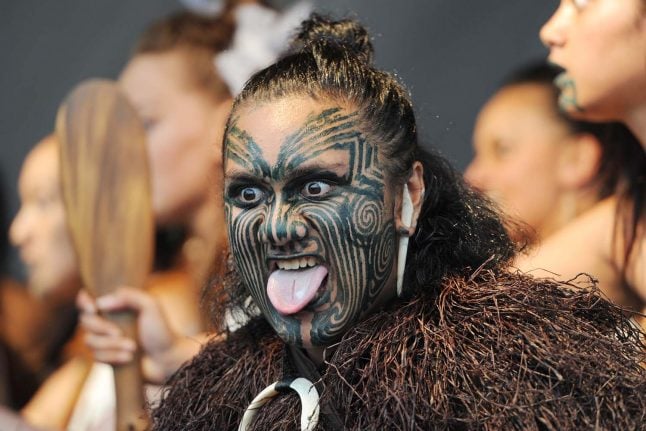 A Māori man in traditional dress at a cultural event in Frankfurt. Photo: DPA

Germany keeps detailed statistics of everything – including the location and nationality of all of its residents, whether local or foreigners. The figures are updated as at December 31, 2018.

For a country of a tick under five million – more than three times smaller than North-Rhine Westphalia – New Zealanders get around.

The stats show that Kiwis are found in every state, although the likelihood of getting a few mates together for a hāngi will differ significantly depending on which state you live in.

Unlike their antipodean neighbours Australia, there are comparatively far fewer Kiwis in Germany.

While there are 13,500 Australians scattered across Germany – 3,605 of which are manning espresso machines and operating beer taps in Berlin – there are only 3,300 New Zealanders in Germany as a whole.

This repeats a pattern seen with most groups of foreigners in Germany.

READ: Australians in Germany – where do they live?

READ: Chinese in Germany – where do they live?

READ: Brits in Germany – where do they live?

Where do the New Zealanders live?

More Kiwis hear Berlin calling than any other state. A total of 900 live in the Haupstadt, meaning just over one in four (27 percent) call Berlin home.

A total of 500 Kiwis are scattered across Bavaria, while 460 can be found in Germany’s most populous state of North-Rhine Westphalia. All up 400 live in Baden-Württemberg, with a further 220 in the city-state of Hamburg and 215 in Hessen.

Down the other end of the spectrum, there are 20 Kiwis in both Bremen and Saxony Anhalt, with 25 each in Mecklenburg Western Pomerania and Thuringia.

But the loneliest state for homesick Kiwis looking for their cuzzies and their bros is Saarland. Only five Kiwis live in the entire state – all of whom are men.

Kiwi Saarland residents looking to get a game of rugby together would need to call up all of their brethren in Bremen and Thuringia to ensure a full game of 15 on 15 (with a few bench spots left over).

As the crow flies, it’s 18,136 kilometres between the New Zealand capital of Wellington and Berlin. It might not seem like the kind of trip you do on a whim, although for some Kiwis that’s exactly how it happened.

READ: Irish in Germany: How many are there and where do they live?

Shane Mason, the organizer of the monthly “Sweet As” New Zealand and German monthly meet up group in Berlin, told The Local that it was a relatively spontaneous decision – one he doesn’t regret at all eight years later.

Mason, a video producer, was given the opportunity to come to Berlin while still living in New Zealand.

“I was making travel television and the producer I was working with was based here in Berlin. I initially turned it down and they said ‘why not come for three months and try it out?’“ he said.

“I came here and got my freelance visa as soon as I could. I loved it.

“This is the first place I lived outside of New Zealand. An opportunity came up and I took it. I had no real plans, I thought I’d just see where it goes.”

Mason said he had plenty of big – and some small – reasons for making the move.

“The lifestyle and the cost of living. The ease of living here. (Germany) offers quite a lot and it’s a bit more easy going here – or at least in Berlin,” he said.

“Oh and the cheap beer – and being able to walk down the street with a bottle. That doesn’t fly back home.” Close relations across the globe

Despite the distance between the two countries, Germany is New Zealand's sixth-largest trading partner, with an overall two-way trade value worth €3.2 billion per annum.

Around 3,000 Kiwi students study in Germany each year, while just under 14,000 German tourists find their way to New Zealand every year – the largest of any country.

A Kiwi presence in Germany?

Much to their frustration, Kiwis tend to be roped in with Australians when it comes to pubs, food and cafes – meaning that a unique Kiwi presence is hard to find.

Berlin’s Kiwi Pub, located in the neighbourhood of Stieglitz, serves New Zealand beer and stocks a range of products for the homesick. The Pub also holds regular events to commemorate national holidays like Waitangi Day and Anzac Day.