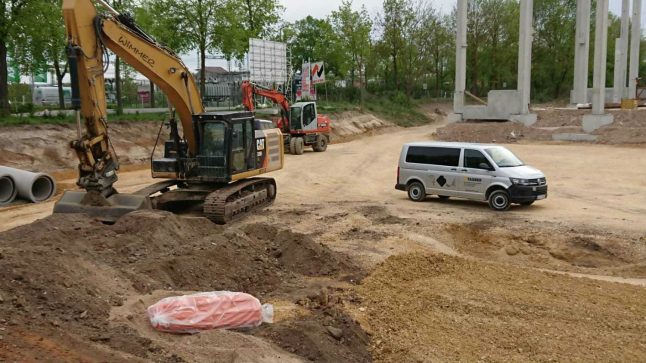 The bomb seen here in a plastic bag on a construction site in Regensburg. Photo: DPA

The 250kg air bomb was detonated shortly after 4.40am on Wednesday. A special robot was used to detonate the device.

The early morning blast was heard throughout the city and caused some damage to buildings around the bomb.

Around 4,500 residents were evacuated from their homes on Tuesday night. As some of the residents refused to leave their home, the evacuation was delayed until early the following morning, Spiegel reported.

According to police spokesman Dietmar Winterberg, at peak times about 900 people were cared for in emergency quarters set up in the Donau-Arena. Others spent the night with friends or relatives, the Mittelbayerischer reported.

Hundreds of police officers, firefighters and helpers were on duty in Regensburg to prepare for the detonation of the unexploded ordnance. The bomb was found during construction work on Tuesday afternoon, in the east of the Bavarian city.

Police tweeted a map of the evacuation area.

Authorities said it was not possible to defuse it. The bomb could not be transported and, according to the police, was equipped with a complicated detonator.

As well as the evacuation of homes, roads were closed while the blast took place.

The bomb was found on Straubinger Strasse, near Bucharester Strasse. The city council of Regensburg, as the responsible safety authority, coordinated the operation.

The bomb discovery had caused unrest among city residents, local media reported. A loud siren went off around 8.20pm. It was intended to draw the attention of residents who were not aware of the bomb discovery but it also caused alarm among people who had not been affected.

On Wednesday morning it was reported that road closures had been lifted and the affected residents had been allowed to return to their homes.

The police spokesman was initially unable to provide any information about the extent of the damage to surrounding buildings.

Pictures of the scene show broken windows and damaged facades. Authorities in Regensburg are expected to inspect the damage over the course of the day.

WWII bombs are not rare

Throughout Germany, World War II bomb finds – resulting in city evacuations during their detonation – are commonplace.

Earlier in the month a WWII bomb was detonated in the River Main in Frankfurt, causing a 30m high water fountain.

At the end of March, 10,000 people were evacuated in Rostock after a WWII bomb discovery.