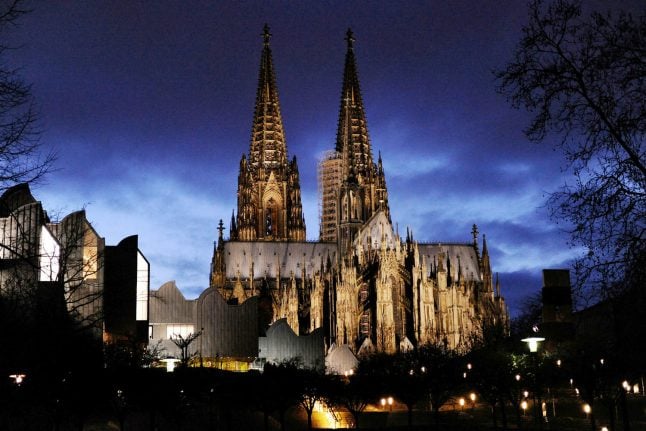 Nearly every town and city has a place of worship devastated over the past millennia – we know of several early timber cathedrals that were utterly destroyed by marauders or lightning strikes in the early medieval period.

Poor Bremen was unfortunate enough to lose two cathedrals completely to war and lightning strikes – one of stone – before something that lasted was erected. Bremen's Cathedral, which was burned down twice before being built in its current form today. Photo: DPA

Wars and accidents in the Middle Ages

Perhaps more significant was the blaze that consumed Cologne's cathedral in 1248 during construction work. As part of rebuilding part of the nave (the central part of the church), unwisely perhaps, fire was actually used to demolish and clear its second half – ironically to avoid demolishing it.

Predictably, the flames burned out of control, leaving a smouldering ruin. It was only through sheer bravery that the cathedral's holiest relic, the shrine of the Three Kings, was saved. The edifice we see today, Gothic in style, is the building begun after the embers had cooled.

Not unexpectedly perhaps, the period of greatest devastation for German churches and cathedrals prior to the Second World War, was the 17th century. The Thirty Years war not only led to the devastation of countless places of worship across the German lands, but depopulation, famine and economic crises led to many fine places of worship falling into disrepair.

Bremen's cathedral – again – experienced a devastating fire in 1660, two decades or so after losing one of its towers to a collapse. Speyer's cathedral was pillaged in 1689 and set alight by the French, resulting in the destruction of almost half the building. In 1662, Passau's cathedral was completely razed by flames, leading to the impressive edifice we see today. Consequently, the latter half of the century led to a boom in grand new baroque edfices, as decrepit, decaying churches could no longer remain standing.

Built, as they were, near large population centres, German churches were greatly endangered by bombing campaigns during the Second World War. In retaliation for the devastation caused in the English city of Coventry in late 1940, RAF bombers would use incendiary devices on urban centres during the remaining years of the war – churches caught in the inferno.

Perhaps the most well-known of the churches lost to wartime firestorms was the Dresdner Frauenkirche, devastated on February 13th, 1945. The stark ruins of the church were left as a memorial to the horrors of war by the GDR for decades, before the church was reconstructed in a mammoth construction, completed in 2005.

Alongside the ruined Kaiser Wilhelm Memorial Church on Berlin's Kurfürstendamm, another church devastated by sustained bombing was the city's cathedral. In 1944, an incendiary device lodged in the lantern – the cathedral's highest point atop the dome. Firefighters couldn't reach it, and subsequently much of the dome collapsed, leaving the church unusable for some time.

Located in today's Kalingrad, Russia, the Königsberg Cathedral is also a spectacular story. It burned down after two Royal Air Force night raids in 1944, and after laying in ruins for nearly 50 years, was reconstructed through private donations. German expellees from former East Prussia were eager to rebuild, despite not being able to attend services in the new cathedral themselves.

In Stuttgart, the city's magnificent Stiftskirche was another victim of allied bombs in July 1944. Fire engulfed the building as a combination of explosive and and incendiary devices rained down upon the city. A further raid later that year, in September, would flatten what remained. Luckily, however, many treasured statues were saved, and they take pride of place in the reconstructed church. Why are churches and cathedrals prone to fire?

In hindsight, it's not hard to see why the great churches of Germany have been so prone to fire. A combination of flammable building materials, neglect (despite best intentions) and conflicts have made them all too likely to have fires start in and around them.

Luckily, across the country, both the faithful and the non-religious fully understand the power that historic churches and cathedrals have. They've banded together to raise money in order to fireproof these buildings, carry out essential maintenance and make them safe for their intended use.

With their help, the holy spaces of Germany will be preserved for centuries to come, for future generations to take comfort in and enjoy.

Next time you choose to visit one of these places and admire their beauty, consider making a small donation for their upkeep. You won't miss it, and you'll be ensuring that a part of the country's heritage lives on for centuries to come.

SEE ALSO: Notre-Dame blaze: How bad is the damage to Paris' iconic cathedral?

TRAVEL
France and Germany bring in extra testing rules at border due to Covid variant fears
Url copied to clipboard!