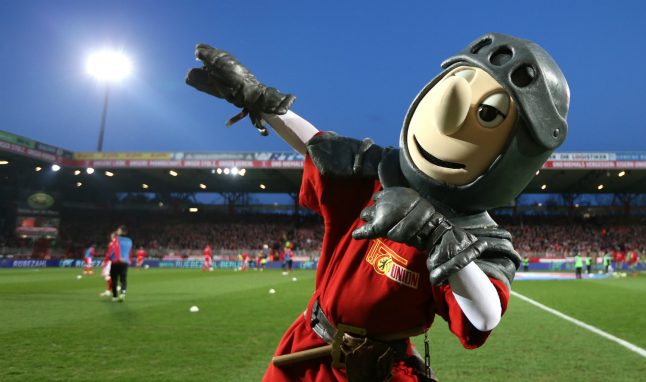 One line at the end of the first verse is sung with particular gusto: “Who will never be bought by the West?!”, scream the “Unioners”.

Berlin's second biggest club, behind top-tier Hertha Berlin, has a rebellious streak dating back to the days of communist rule in East Germany.

With the club third in the second division, bidding for a first promotion to the Bundesliga, Unioners rail against the commercialism of modern football.

Nestled in the woods of the East Berlin suburb of Köpenick, Union's fiercely local fanbase is growing, as young newcomers to the city fall in love with the club's identity.

SEE ALSO: Der Klassiker: Your guide to the biggest Bundesliga game since 2002

'Down with the wall'

A red-and-white scarf around his neck, Christoph remembers the “slightly anarchic” atmosphere around the club when he first became a fan as an 11-year-old in the 1970s.

Founded in 1966, Union were conceived as a “civilians' club”, as opposed to the official army club Vorwärts Berlin, and the club of the secret police Dynamo Berlin.

They came to be seen as a plucky, likeable alternative to Dynamo, who dominated East German football.

He remembers how fans would shout “down with the wall!” when players formed a wall to defend a free-kick.

“Everyone in the stadium knew which wall they were talking about,” he smiles.

While the once mighty Dynamo have sunk to Germany's fourth tier, Union are one of the few clubs from the former communist East who have enjoyed success in reunified Germany. A stadium built by fans

There is minimal advertising and the club has ruled out selling the stadium's name to a sponsor.

“The match is not a circus event or a television show,” explains Union's head of communications and stadium announcer Christian Arbeit.

The club works to keep its fans and members on side, partly in recognition of all they have done for it in the past.

In 2004, with Union on the brink of bankruptcy, many fans gave blood at their local medical centre and donated their donor's fees to the club.

Four years later, more than 2,500 fans volunteered to help renovate the stadium so it would meet second-division requirements.

The club later erected a monument to the volunteers.

Union can now look back on a decade of stability in the second tier. Plans to add around 15,000 places to the 22,000-capacity stadium were announced in 2017, and the team are regular promotion candidates.

“I don't want the club to go up because I am convinced that, little by little, they would then have to sacrifice their values,” he tells AFP.

He is not alone. In 2017, when Union came within a few games of promotion, fans held up a banner reading: “Shit! We're going up!” Union players celebrate a goal at a recent game against Ingolstadt. Photo: DPA

More recently, Union fans have made national headlines for the wrong reasons.

During last month's 2-0 home win over Ingolstadt, an apparent Union supporter launched an anti-Semitic Twitter tirade against Ingolstadt's Israeli captain Almog Cohen. The tweet was immediately condemned by the club, and was the subject of a police investigation.

For Florian Schubert, author of a book called “Antisemitism in Football”, this was an “isolated case”.

Andre Rolle, meanwhile, believes that “a good number” of Union supporters vote for the far-right AfD party, but points out that the leading ultra fan groups tend to be more left-wing.

“Unlike other places, like Chemnitz or Cottbus, the extremists don't get to decide which flags are displayed or which songs are sung,” insists Rolle.