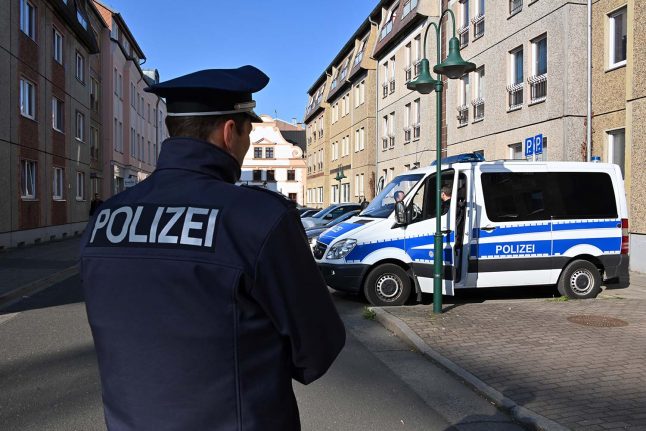 A police officer outside a raided property in Cottbus. Image: DPA

The searches have been focused around the Brandenburg town of Cottbus, which has had a growing reputation for extremism and hooliganism in recent times.

While no arrests were made, information and evidence was seized with regard to 20 individuals who are suspected to be members of right-wing extremist crime gangs.

Those targeted are believed to have participated in riots in Chemnitz in 2018, with some identified as Germany’s neo-Nazi scene. The police are investigating a range of offences including possession of illegal weapons, assault, tax evasion and distribution of banned materials.

Heiko Homburg, a spokesman for the state office of constitutional protection in Brandenburg, told DPA that Cottbus is a “hotspot” of right-wing extremism and a “toxic entity”.

The raids were conducted on a variety of premises including tattoo shops, gyms, warehouses, nightclubs and residences. More than 30 premises in the states of Brandenburg, Berlin, Mecklenburg-Western Pomerania and Saxony were searched.

Police said there were approximately 400 individuals involved in the network, with just under half of those living in Cottbus.

Concerns of an increase in right-wing extremism have been growing in recent years, particularly in the former east.

The Local visited Cottbus in 2018 to get an understanding of whether the city’s reputation as a hotbed of right-wing extremism held true.

We spoke to international students to get their perspective on whether they felt welcome in the town which is home to Brandenburg’s second-largest university.

Many of those interviewed said that the town's reputation for right-wing radicalism didn't hold water, or represent the full scope of the diversity and openness seen in the town.

READ: A portrait of Cottbus, the German town that stopped accepting refugees