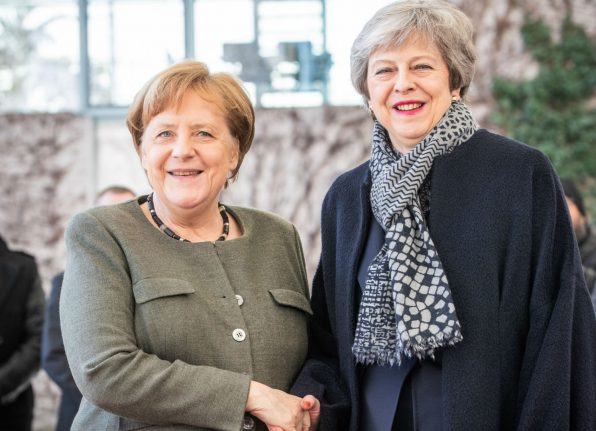 Angela Merkel and Theresa May in Berlin on Tuesday. Photo: DPA

Merkel told Germany's parliament ahead of a special EU summit in Brussels dedicated to Brexit that leaders may well agree to a delay “longer than the British prime minister (Theresa May) has requested”.

She said she would meet French President Emmanuel Macron ahead of the summit with the aim of hashing out a common stance on the length of a further extension.

“I think the extension should be as short as possible. But it should be long enough to create a certain calm so we don't have to meet every two weeks to deal with the same subject.”

Without a postponement, Britain is due to crash out of the EU at midnight on Friday under a “no-deal” Brexit that could trigger economic chaos.

SEE ALSO: Meet the Scots mayor in north Germany being pushed out due to Brexit

May has embarked on a last-ditch battle to postpone Brexit from April 12th to June 30th so as to arrange an orderly departure — but European leaders are expected to offer her a longer delay of up to a year.

Merkel, who met May on Tuesday in Berlin, stressed that it was in the “strong interest” of Germany as the EU's biggest economy to avert a disorderly Brexit.

A source from Merkel's Christian Democratic Union later quoted the chancellor as telling a party meeting that she viewed an extension of the Brexit deadline for “several months to early 2020 as possible”.

But a French source said a 12-month extension “seems too long”. Merkel said Berlin had been “in constant contact with the French side, there will be a meeting today” with Macron “to again coordinate our positions”.

“I think we will come to a conclusion that will not fail due to a disagreement between Germany and France,” she said.