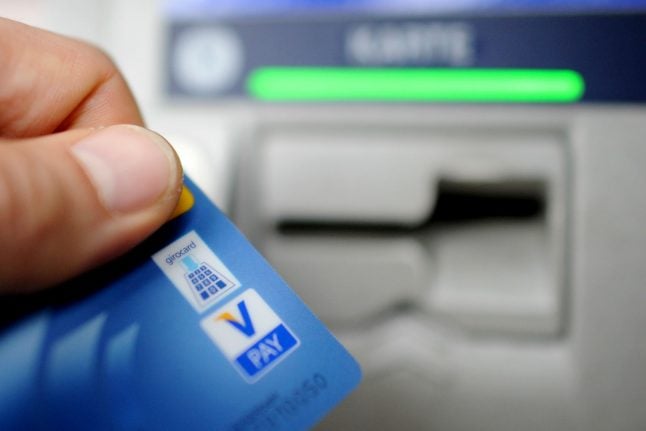 If you find that you can't withdraw money out of your account, maybe it's been frozen. Photo: DPA

It seems the ultimate catch-22. Your account has been frozen due to unpaid taxes or debts, but you’re unable to make the payment because your account is frozen. Even making transfers to the Finanzamt (tax office) won’t be possible, making actually paying the debt – and getting access to your account back – that much more difficult.

Whether by phone or by person – or on the odd occasion that there’s a valid email address – contacting any government department is a time-consuming exercise. And unlike the rapid speed at which the Finanzamt moves to freeze an account, getting it unfrozen can be a painfully slow affair.

With no access to your funds, even just buying everyday things like groceries becomes tough. As you can’t make transfers and direct debits, you might find yourself immediately unable to comply with other financial obligations like rent and phone bills – particularly if you don’t have a local network of friends or family to rely on.

READ: The ultimate guide to paying tax in Germany

READ: These are the eight tax breaks that you need to know about

And as with any of these guidelines, they seek to provide a broad overview of the situation and are by no means a substitute for legal advice. Always remember to seek independent legal advice. Ice to meet you

For non-Germans, the idea of freezing a bank account seems pretty extreme. In much of the world, it’s a move usually reserved for members of organized crime syndicates and international men of mystery. But in Germany, it’s relatively common – particularly for freelancers and small business owners.

Just one missed payment is usually enough to bring on the freeze – but not before you’ll receive the standard ominous warning (Mahnung) letter, probably with M-A-H-N-U-N-G in all caps.

From there on, the clock is ticking. The Finanzamt can freeze your account within a month of the letter, but they will usually give you a deadline upon which the outstanding payment needs to be made. And while the stereotype about German efficiency is a laughable myth when it comes to government, the stereotype about punctuality certainly is not.

What does ‘frozen’ mean?

A frozen (einfrieren) bank account cannot be accessed our used. Your cards won’t work in ATMs or at the checkout. While you should be able to see your internet banking balance, you won’t be able to make transfers – even to the Finanzamt.

While the Finanzamt will probably have contacted you on several occasions about the upcoming freeze, there’s a fair chance your bank won’t have let you know about it. Even when logging into internet banking, it will seem like you’ll be able to make the usual transfers – you’ll get a text message to confirm you’re transferring funds – except that the money will still be there the next day.

Even transferring between principal and sub-accounts – as well as credit card accounts – won’t be possible.

In knowing what a frozen account is, it’s also important to know what it is not. A blocked (gesperrt) account is something else and will usually only apply to students from abroad who are studying in Germany.

SEE ALSO: Tip of the week: How to open a blocked account in Germany

Under certain visa conditions, a blocked account will allow the withdrawal of a certain amount of money per month but no more – in order to ensure that the student has enough money to live for the duration of the course.

Generally speaking, the tax department seems to have a ‘freeze first, ask questions later’ attitude. If you’ve done something wrong – or even if they simply suspect you have – then your account could be swiftly iced over.

There are a range of different reasons why a bank might freeze your account, but unless you’re engaged in illegal and nefarious activities, it will usually be due to an unpaid tax debt.

Freelancers are often required to pay their tax up front for the coming year – usually in quarterly installments – meaning that a failure to pre-pay is likely to be the cause of the freezing.

Other than that, people suspected of organized crime or terrorism activities can have their accounts frozen. Where large payments are made – particularly from abroad – the Finanzamt may consider the payments to be suspicious and freeze the account as a precaution.

There are even stories of people who have deposited large gambling winnings having their accounts frozen – and then later having to prove that the funds weren’t earned in a nefarious fashion.

Aside from freezing your account due to debts to the government, it can also be frozen for debts owed to creditors. This can in some cases include unpaid TV tax debts, so be sure to read our guide on staying in the black with the TV licence folks.

How do I ease the freeze?

As we said above, simply paying the debt won’t help – because you will be unable to. Instead, you’ve got one of two options: visit your bank or visit the Finanzamt.

If you’re with one of the big German banks – i.e. one that you can actually walk into – this might be your best bet. They’ll be able to check the status of your account and provide advice on how to move forward. In the most part, they’ll be able to transfer the money directly to the Finanzamt, with your account becoming active again within a week. Contacting the bank first also makes sense in getting to the root cause of the freeze – i.e. it may not actually be the Finanzamt in the first place.

A visit to the Finanzamt is likely to be more difficult and more time consuming. However, if you’re with a bank that is harder to get in touch with or if you don’t have the funds to pay the amount right away, this will be your course of action.

If you can prove that you don’t have the money – which can be harder than it sounds – the Finanzamt may agree to a payment plan. But if you only have the money to cover the debt and not much more – say you have €2000 in the bank and the debt is €2000 – convincing them that you need money for food and rent can be a little difficult.

The main thing is to act fast. If the freeze lasts long enough, they have the power to close the account entirely. This can cause big problems down the line, for instance by harming your credit rating (Schufa) or by making reclaiming the rest of the money that was in the account more difficult.

The actual time period here can vary, so your priority should be to act as quickly as possible.

Preparation, prevention and Pünktlichkeit is key

Obviously the best way to dodge the difficulties that come from a frozen bank account is to make sure avoid the freeze in the first place.

This means making sure to pay all of your debts on time – and to open up every single letter you get from the Amts, no matter how insignificant it may seem.

While it may sound like something out of a mafia movie, tax advisors actually tell their clients to keep some cash in a safe place at home for a rainy day.

The internet is littered with stories of people having their accounts frozen erroneously and through no fault of their own, but there is usually little recourse to be had against the Finanzamt for fees, charges and lost business due to a frozen account – even if it’s their mistake.

Therefore, remember that prevention is always better than the cure. Try and keep your financial ducks in a row as much as possible – whether it be tax, health insurance or any other official payments. And maybe stock up on canned food and candles, just in case.