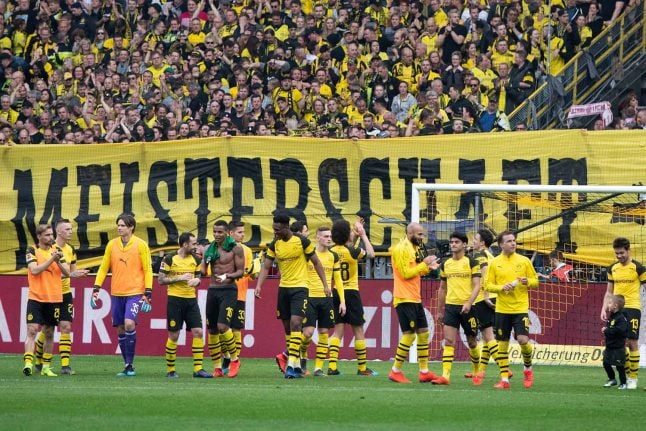 From an all-German final in the 2013 Champions League at Wembley to Die Mannschaft lifting the World Cup trophy in Rio just over a year later, the mid-2010s was German football’s crescendo.

The national side’s fourth World Cup was a triumph of German planning and preparation; the domestic league – the Bundesliga – showed how to create an internationally competitive club competition based on fan inclusiveness and home-grown talent rather than petrodollars.

Since then, however, domestic and international German football has lagged under a blanket of complacency – and a crisis of competitiveness.

In the Bundesliga, Bayern Munich have slaughtered all before them on the way to winning an unprecedented sixth straight title, maintaining their dominance by hoovering up the nation’s emerging talent while simultaneously pulling the rug out from under any challenger who dares to give them some sideeye.

At the same time, Dortmund’s fortunes have taken a tumble, first from a Bayern recruitment raid, a slide later cemented as Jürgen Klopp took his talents to Merseyside.

However, a refresh of the national side has so far brought back international success, albeit tentatively.

On Saturday evening in Munich, fans will learn if the Bundesliga is making a true return to competitiveness and international legitimacy, or if we’re set for six more weeks of winter.

The odd forlorn Black and Yellow hope aside, Saturday’s match between Bayern Munich and Borussia Dortmund is the first that actually matters since the 2011-12 Bundesliga season. It’s the most important meeting between the sides since the 2013 Champions League final. Paco Alcacer scores the winner as the teams met earlier in the season. Image: DPA

The 2018-19 Bundesliga season has been an odd one – and not just because Munich aren’t 18 points ahead with seven games to play. German football’s two biggest sides entered the season with new men in the coaching chair.

After Bayern coach Jupp Heynckes hung up the Bayern clipboard for the fourth and final time at the end of last season, Munich promoted young coach Niko Kovač instead of hiring a tried and true manager from the global carousel of top football coaches.

Kovač led Frankfurt to a German Cup title in his last game in charge, defeating his future club in the process.

After years of courting, Dortmund finally got the man they wanted in Swiss coach Lucien Favre. Favre, known for his attention to detail and development of young players, was given his first chance in charge of a ‘big club’ after decades of success coaching in Switzerland, Germany and France.

As is a modern necessity given the gap in wealth between the two sides – Bayern’s annual revenue is double that of Dortmund – Die Schwarzgelben’s resurgence has been driven by promising youth and recycled experience.

They’ve been supported by Axel Witsel and Thomas Delaney, a backbone of recycled bargain journeymen signed for their experience and cool heads rather than any promise of a future transfer riches.

At the centre of it all is Marco Reus, the Dortmund-born team captain who has knocked back offers to move elsewhere – including from Bayern Munich – to remain at the Westfalenstadion in search of his first Bundesliga title. If Dortmund are to lift the trophy this year, it will undoubtedly be Marco’s triumph. For Bayern, this season has been a rebuild – but such is their dominance, they were and are still expected to lift the title.

The skeleton of one of German football’s most successful international periods has begun to creak and crack. If they are able to overcome Dortmund while undergoing a rebuild in the process – even with their superior financial muscle – it will be Kovač’s finest moment.

Der Klassiker, otherwise known as the German Clasico, is the moniker given to any clash between Bayern Munich and Borussia Dortmund – German football’s two modern heavyweights.

The name is a Germanisation of Spain’s ‘El Clasico’, the name given to matches between eternal rivals Barcelona and Real Madrid. Widely viewed as the biggest regular club match in world football, El Clasico, attracts a worldwide viewership of over 100 million every time it takes place – numbers that rival the Super Bowl.

While Germany’s version won’t get close to those numbers, Der Klassiker has become the biggest match in German club football in recent years.

In truth, Der Klassiker is only a recent invention, with Dortmund-Schalke or Munich versus any one of their Bavarian rivals having a far more significant ‘derby’ character.

However, the game’s status reflects the recent dominance of both sides. In the past 25 seasons, either Bayern or Dortmund have won 21 Bundesliga titles between them.

And as money – particularly through international sources and broadcasting rights – has become a bigger factor in football, this dominance looks set to continue.