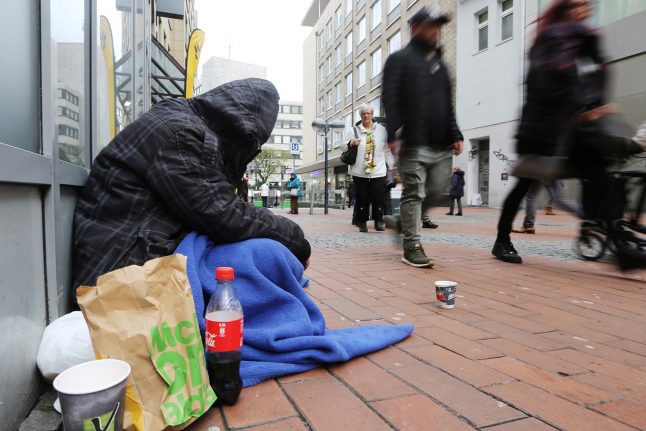 Poverty is on the increase in German cities. Image: DPA

New research has illustrated the increasing poverty in larger German cities, particularly those in the Ruhr region in North Rhine-Westphalia, Germany's most populated state.

The research, announced in the Ruhr city of Gütersloh, showed the share of welfare recipients in cities with more than 100,000 inhabitants increased to 14 percent – four percent above the national average.

The research, conducted by the Bertelsmann Foundation and reported in the Rheinische Post on Tuesday, showed the city residents were noticing the increases in poverty more so than the population at large.

In total, 46 percent of city respondents said they had witnessed an increase in poverty, whereas only one-third of nationwide respondents felt the same.

Ruhr poverty on the rise

Gütersloh – one of many mid-size cities in Germany’s industrial heartland – was chosen as the site of the research release to highlight the rising poverty in the region.

Poverty has increased in 13 communities in the Ruhr region with more than 100,000 inhabitants. The Ruhr area – known in German as the Ruhrgebiet – is home to more than 5 million people and is the third largest urban area in the European Union.

The industrial area was one of Germany’s richest throughout the 20th century on the back of a thriving coal mining industry. As the coal mines have closed however, wages have stagnated and poverty has trended upwards in the region. Poverty is on the rise in several German cities. Image: DPA

SEE ALSO: 'I haven't eaten all day': Growing up poor is a dead-end street in wealthy Germany

German taxpayers foot a 5.5 percent ‘solidarity tax’ which is aimed at bridging the economic gap between the west and the former communist east.

The money is channeled into economic support for the states that make up the former east, although there have been repeated calls in recent years to abolish the tax.

Taxpayers demonstrating on anniversary of fall of Berlin wall/#Mauerfall  against economic subsidy tax for formerly communist east. They want the new government to kill the so-called #Soli. pic.twitter.com/2dE4lWmCTw

The ’Soli’ tax has also been challenged in the courts, with the efforts largely unsuccessful.

Despite a former timeline set for the abolishment of the solidarity tax in 2019, the German government recently delayed a debate about whether or not to end the tax to after the 2021 election.

A tale of two (trends in) cities

In total, poverty rose in German cities. Just under half – 46 percent – of the city dwellers saw an increase in poverty rates, while poverty stayed the same in 20 percent of the cities surveyed.

In 34 percent of the cities surveyed, poverty was shown to have fallen.