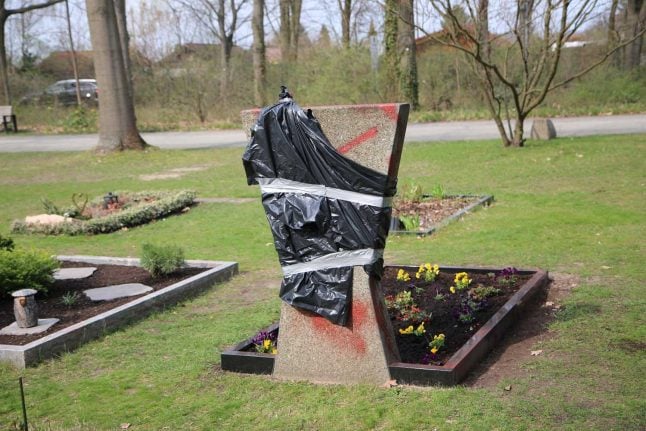 The markings on the graves were later covered up by police. Image: DPA

One gravestone was toppled over, both were defaced with red spray paint, and flowers were ripped out of their beds in the overnight attack on a cemetery in the Berlin district of Neukölln.

The late officers are Roland Krueger, a police commando member shot dead during a 2003 raid on a Kurdish-Lebanese crime family, and Uwe Lieschied, shot dead while confronting a robber on the street in 2006.

The interior minister of the city-state of Berlin, Andreas Geisel, voiced his “disgust and shame” about the violation of the graves, which he described as “a wicked act directed against those who died while working to ensure our safety.”

Other police officers restored the graves in the morning, while the BfV domestic security service took over the case because of the illegal Nazi symbol.

The Christian Democrat politician's Burkard Dregger lay flowers on the desecrated graves on Wednesday afternoon, telling the Berlin Tagespiegel that he was there to honour the memories of the fallen officers.

“I have no sympathy for such acts of hatred,” Dregger said

“It was important to me, on behalf of the CDU Group, to plant flowers and talk with relatives. (I wanted) to assure them that we feel very close to them and that we are always with each other to stand by the police if attacked,” he said.

The incident was not the only recent example of desecration of police officers being targeted in the cemetery.