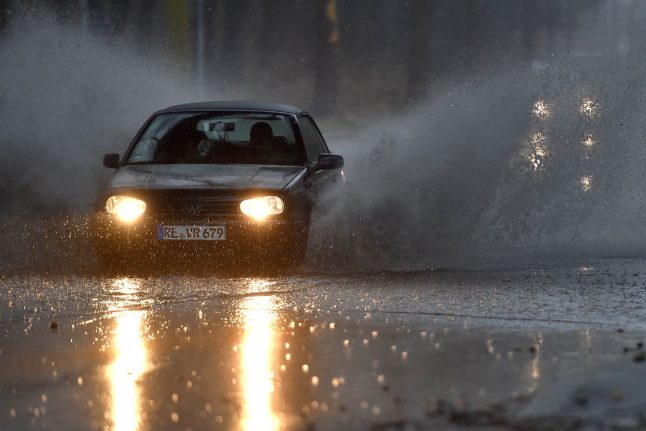 A car drives through a storm in NRW. Image: DPA

But ‘Louie’, a low pressure system moving in from Scandinavia, is set to bring rain and cold weather back to much of the country – particularly early in the week.

The German Weather Service (DWD) has predicted that a cold front moving in from the Baltic states and Belarus will reach Germany on Monday, bringing with it rain and possible snow.

Temperatures in much of Germany are unlikely to go above six to nine degrees during the day, with the weather slightly warmer in southwest Germany.

“In addition to rain, isolated short sleet storms are expected. Temporary snowfall may also be seen across the lowlands,” Sebastian Schappert from the DWD said.

“On Tuesday evening, the wind is set to drop quickly, with showers and thunderstorms expected.

“In the Erzgebirge and the Alps snow will fall (from Monday on), with 10 to 20cm of snow expected.”

It’s not all doom and gloom for the week, however. From Wednesday on, the weather is expected to improve as a dry weather pattern moves in from the British Isles.

While the evenings are still likely to be cold, the DWD predicts temperatures of up to 18 degrees later in the week and on the weekend as well as sunny, dry conditions.

The forecast continues what has been an unpredictable few months weather-wise in Germany. After one of the most mild winters in recent memory, spring-like conditions in February and March have been punctuated by thunderstorms and torrential rain.

As The Local reported in the middle of March, a small town near Aachen in the country's west was hit by a tornado. A house after being hit by a tornado in the town of Roetgen. Image: DPA

Around 40 homes were damaged by the storm which was described by the local fire brigade as 'short and violent.