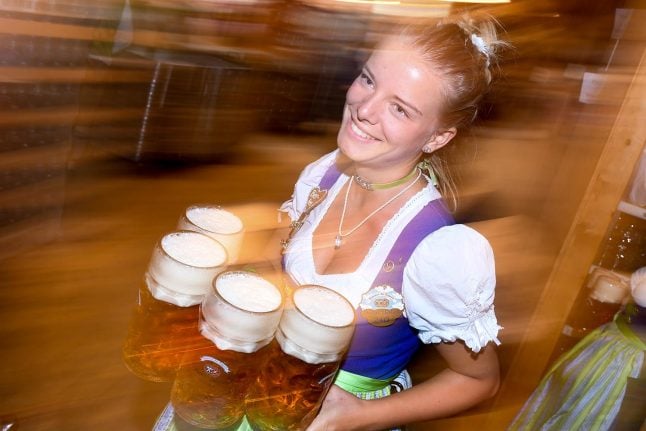 A waitress serves beer at the Munich Oktoberfest. Image: DPA

For a country which can sometimes seem to outsiders as being especially ‘efficient’ when it comes to smiling, it might be a stretch to say that Germans are known for their upbeat attitude.

SEE ALSO: This is why people in north west Germany are the happiest

From the Berliner Schnauze to snobby Munich, there can be a perception that Germans have a ‘glass half empty’ view of things.

But a new nationwide survey, released just in time for Wednesday’s International Day of Happiness, has indicated that the majority of Germans believe themselves to be happy.

The survey found that 66 percent of Germans consider themselves to be happy. In total, 71 percent of respondents indicated that they thought their friends, family and colleagues were happy – a five percentage point increase over those who self reported.

A total of 2,026 people from across Germany were surveyed earlier this month. Just over one quarter of respondents (27 percent) told pollsters they considered themselves to be unhappy. Seven percent of those polled preferred not to say.

The study also unearthed that most elusive of feelings: German optimism. Half of the respondents (49 percent) indicated they thought they would be similarly happy in five years time, while just under a third (28 percent) predicted they would be happier.

While the findings may bode well ahead of Wednesday, the report indicated that other parts of German-speaking Europe also had a spring in their step.

Austrians reported an even higher level of happiness. In total, 81 percent of Austrians surveyed said they were happy – while two thirds (65 percent) thought that Austrians on the whole were happy.