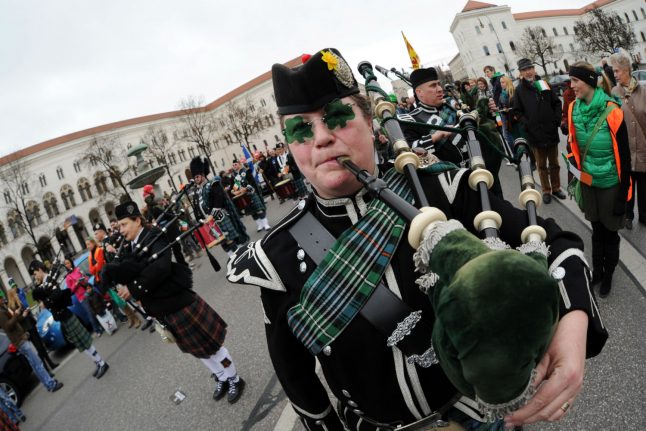 Starting on Friday evening, Germany isn’t just going green with all of the climate change protests that have erupted throughout the country.

Rather this weekend, the Bundesrepublik will be showing its Irish side through a fun array of events – from parades to festivals – that are taking place in all corners of the country leading up to Saint Patrick's Day on Sunday, March 17th. Here are our top picks.

Joining the masses in Munich

Arguably Germany’s largest St. Patrick’s Day celebration, a three-day festival is taking place in Munich – including its grand green glory, the parade on Sunday. With more than 50 groups and 1,300 participants, the street event is often described as “​Irisch, Bayerisch und bunt” – or Irish, Bavarian and colourful. After Oktoberfest, it’s considered to be the largest multicultural celebration in the city.

The accompanying festival, located largely in Odeonsplatz , will be filled with food trucks with specialties including Irish beef and of course beer. There is also a long line-up of Celtic and Irish music, including The Ocelots, New Bedford and The Monks.

On St. Patrick’s Day itself, the city will participate in its annual “Greening”. Buildings such as the Olympic Tower, the Kilians, the Kennedys and the Hard Rock Cafe will all become lit up in glowing green colours. Getting cheeky in Düsseldorf

o’reilly’s in Düsseldorf’s Altstadt will be hosting a weekend long party, with an Irish music line up which includes “The Rogues from Country Hell” and “Drunken Lullibies”, and lots of beer to boot. Entrance to the pub is also free for anyone who dons green face paint. On Friday and Saturday the bar will be open till 3am and on Sunday till midnight.

Festivities in and around Frankfurt

A pub by the same name in Frankfurt, O Reilley’s, is also hosting an all-weekend party. Not far from Mainhattan’s main train station, the party will start at 9pm on Friday and stretch until 11:30pm on Sunday. On Saturday, an Irish karaoke competition will take centre stage – and perhaps facilitating the number of sign-ups – drinks will be half price.

The nearby town Rüsselsheim am Main will be hosting its annual Paddy’s Weekend with musicians including Wild Molly and the Uniceltics, as well as a sweeping selection of Irish food and drink from old time goodies like Guinness to more sophisticated specialties such as salmon.

A bit of Dublin in Dresden

From Friday through Sunday, Dresden is hosting a free St. Patrick’s Day festival at its Postplatz, which includes a lively line-up of music and lots of Irish dance, lead by the city’s own Irish Dance Company.

Several pubs around the city will also be partaking in the festivities: Tír Na Nóg in the hip Neustadt will be hosting live folk rock, while the club Gisela will be serving up green beer (and slightly less traditional green prosecco) along with a hearty serving of live Irish rock. Lots of Bier in Berlin

This year, the capital’s beloved St. Patrick’s Day parade might not be taking place, but there are lots of other ways to celebrate.

From 3pm on Saturday, a St. Patrick’s Day Festival will be taking place at Birgit & Bier in Kreuzberg. The Irish Deputy Ambassador Maeve von Heynitz, the Berlin bagpipe players “The Berlin Pipe Company” and the Irish dancers of the “Jigs & Reels Irish Dance Academy Berlin” are expected to open the festival at 3pm.

For those interested in dabbling in sports the Irish way, there will also be a section of the festival devoted to Gaelic football and hurling. Bands such as “The Broken Jug Ramblers” and “The Brave Believing Dreamers” will play.

As usual the TV Tower at Alexanderplatz will be festively lit up in glowing green colours — courtesy of Berlin’s Irish embassy – throughout the whole weekend.

Hamburg hosts a slew of Irish bars which will all be serving up loads of live music, Irish whiskey and gin over the weekend. Near the city’s Rathaus, Paddy’s Bar will be serving all sorts of Irish spirits and cider along with a lively music line-up.

A long-standing Irish institution, Molly Malone’s will also have Irish dancing and spirits. The Thomas Reed Pub and Club will also host a party with both live bands and DJs, stretching from Friday night to the wee hours of Monday morning.