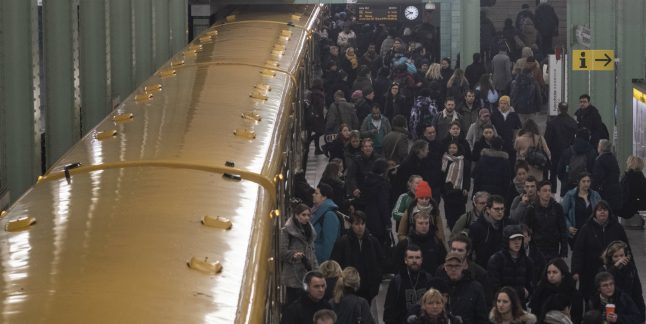 Trade union Verdi had called earlier this week for bus drivers at Berlin's public transport operator, the Berliner Verkehrsbetriebe (BVG), to down their tools and walk out as part of a so-called ‘warning strike'.

The industrial action started at around 3.30am and was due to last until 10pm. The strike is being held to put pressure on BVG in the current wage negotiations between employers and the union.

Verdi announced that no buses operated by BVG were in operation on Thursday, signalling that the strike was strong.

“The goal is to use this warning strike to increase the pressure on employers in the current negotiations,” Verdi negotiator Jeremy Arndt said.

BVG is the largest municipal transport company in Germany and, with more than 2.9 million customer trips per day, it's the backbone of Berlin's local public transport system.

As we learned, there will be a strike against the BVG by the Verdi union on the 14 March. According to the union’s announcement, the BVG’s bus traffic will be striked against on Thursday from the beginning of operations in the morning (ca 3:30 AM) until 10 PM. #BVG @berlinairport pic.twitter.com/dPOHgGOPE9

If you’re travelling in the capital, here's how the strike might affect you, and details of the other services you can use instead of buses.

S-Bahn and regional trains will run this Thursday according to the timetable. These trains are not operated by the BVG, but by Deutsche Bahn and other companies.

Rail replacement services (SEV) on these lines will not be affected. “The S-Bahn does not use BVG buses for replacement transport, it is not affected”, said S-Bahn spokeswoman Sandra Spieker, reported the Berliner Zeitung. Unlike the strike that took place in February, on Thursday underground trains (U-Bahn) and trams will not be affected. But services are much busier than usual as many people have switched to these modes of transport.

It is also expected that replacement services for the underground lines U1, U8 and U9 will start later in the evening. Normally they start at 10 or 11pm, but at the beginning there may be some restrictions.

The BVG buses will remain off the roads on Thursday. The warning strike lasts until 10 pm, after which it may take some time for all buses to operate normally.

The following routes operate with slight restrictions: 112, 140, 184, 283, 370 and 893. These routes are operated by private bus companies commissioned by the BVG. These companies are not affected by the tariff dispute.

There will be a bus shuttle to Tegel Airport – this time from Jakob-Kaiser-Platz underground station, not from Jungfernheide station as was the case with the first strike in February.

“The Jakob-Kaiser-Platz underground station is half a kilometre closer to the airport,” airport spokesman Daniel Tolksdorf told the Berliner Zeitung.

The so-called “emergency shuttle service” will again use four coaches and will run from 5 am to 11 pm. Tolksdorf recommended scheduling more time for the trip to Tegel Airport in case of longer waiting times or busy services.

Among other things, Verdi wants to implement a 36.5-hour working week with full wage compensation for the approximately 14,000 employees of BVG and its subsidiary Berlin Transport. Today, almost half of the employees have to work 39 hours — these are workers who have been hired since 2005.

Negotiations have failed so far despite offers by BVG to the trade union.

STRIKES
How the Lufthansa ground crew strikes at German airports could affect you
Url copied to clipboard!