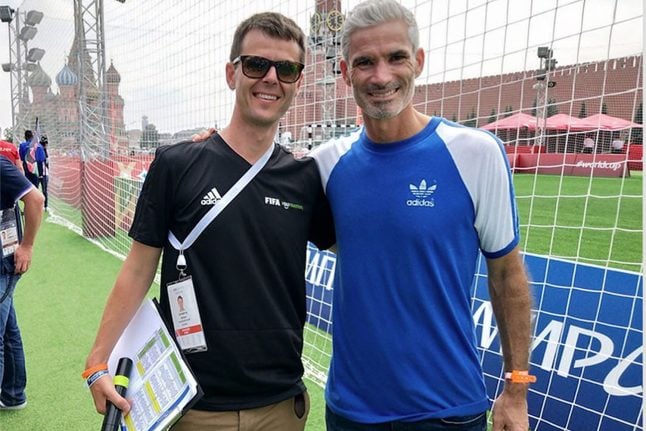 While football might be the ‘World Game’, in George Springborg’s native Australia, the sport doesn’t quite have the same reach.

Football – more commonly known down under as soccer – would probably only just make it into a list of the country’s top-five favourite sports, with few tuning in outside of World Cup time.

It perhaps makes it all the more surprising then that just 15 years after leaving Sydney for Berlin, Springborg is now the Network Development Manager for Street Football World – stylised as streetfootballworld – an NGO which seeks to use football as a way of promoting charitable causes alongside social outreach and social cohesion.

With high-profile supporters including some of the sport’s biggest names in Mats Hummels, Juan Mata and Eric Cantona, the organisation has grown in stature and influence in recent years.

Springborg says that the goal of the organisation is simple: to pursue social aims through football.

“We are an organisation that uses football for social development – we seek to change the world through football,” he says.

Street Football World is funded through a collection of public and private funders, including the German government, football organisations like FIFA and UEFA, and an assortment of sponsors. Football, the world’s most popular sport, continues to grow in popularity. However with the money now flowing into the game, there’s a feeling that the game is losing touch with the communities from which it grew.

Springborg tells us that Street Football World aims to do something different.

“Football began as a social movement. That’s not always reflected in how football is these days. There’s very little trickle down into the grassroots,” he says.

“We have worked with the football industry as a whole, placing the idea of using football for good at the heart of the entire thing.”

‘One year turns into 15 very quickly’

Like many Berliners whose stay was far longer than envisioned, Springborg says his initial plan wasn’t to make Berlin a permanent home.

“I studied German in high school. I did a small study stint in Germany and I went again when i was 15,” he said.

“Then came here to study (at university) and never left.”

“I also really like living in Berlin, there are not too many cities in the world that are so open and where one can be oneself and no-one gives a shit. And certainly Sydney is not that,” he said.

“It was a relatively easy decision. One year turns into 15 very quickly.”

One of Street Football World’s core initiatives is Common Goal, a campaign to have footballers pledge one percent of their wages to charitable causes.

Given the explosion in player wages recently, one percent could make a significant differences to the activities of Street Football World and charitable causes more broadly.

Springborg explains that the campaign was a way to bridge the gap between football’s elite and the grassroots.

“The idea that one percent of the profit that players made would be donated to organisations using football for good highlights our message. The idea now is to spread it to other football institutions.”

Would such a plan work in his native Australia? Aside from football being at best the fourth most popular sport down under, the support networks and infrastructure just aren’t as established as in Germany.

“We actually have one of our partners based in Australia – Football United – using football to promote the integration of refugees. They’ve had it tough.”

“They do great work, but the level of support isn’t great. The use of football as a tool for social development isn’t so supported (in Australia). There is a lot of political agendas in Australia.

“We think that sport could be used to have a much stronger impact. It exists, but not as strong as could be, which is amazing considering its a country that loves sport.”

Springborg says the organisation’s success is thanks to Germany’s welcoming nature – and of course the country’s love of football.

“In Germany, there is a stronger understanding of the game. Football is also a much more established sport, far more resources.”

Aside from being the country’s most popular pastime, in Germany the links between football and charitable causes are well established.

“During the refugee influx into Germany a few years ago, football clubs and the football community rallied around the recently arrived refugees. For many, football clubs were their first point of call.”

Aside from rents, the failed airport and the weather, another topic to get the average Berliner’s tongue wagging will be the changes they’ve seen in their time in the Hauptstadt.

With 15 years under his belt, Springborg says he’s seen a city change significantly, particularly in terms of opening up internationally.

“When I moved here 15 years ago, English wasn’t spoken much on the trains or bars. Of course there were some tourists, but you didn’t bump into people all the time. But these days people are speaking all different types of languages on the streets of Berlin.”

There's been another change, this time back home. At the time Springborg arrived, Australia hadn’t qualified for a World Cup since 1974.

This is something they have now managed to do each tournament since Germany held the 2006 edition, or since Springborg made Germany his home. He's not sure he's responsible for his home country's upturn in fortunes – particularly if his Bundesliga side's poor form is any indication.

“In 20 years of supporting Hamburg (in the Bundesliga) I have had nothing to celebrate.”

Find your next English language role in Germany here