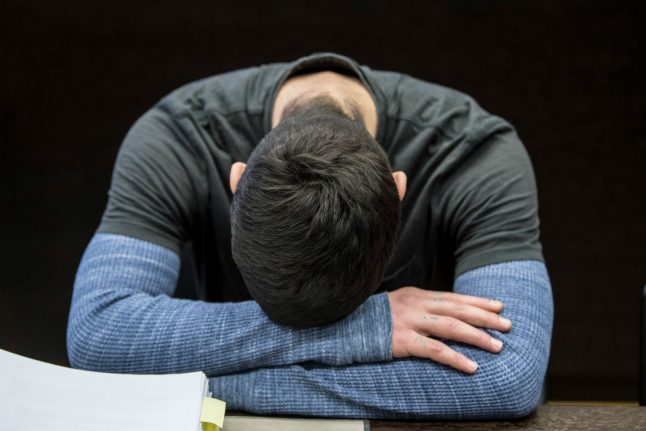 Ali B. in a Wiesbaden court on Tuesday. Photo: DPA

He denied raping her.

“My vision went black and then it happened,” Ali Bashar, 22, told the court through an interpreter. “I don't know how it could have happened.”

Bashar left Germany for northern Iraq shortly after the May 2018 crime but was arrested and brought back in a mission joined personally by Germany's federal police chief.

His trial for the rape and murder of 14-year-old schoolgirl Susanna F. started Monday under tight security in Wiesbaden, the city where the killing took place.

Around a dozen people held a vigil for the victim outside the courthouse.

For the murder alone, Bashar faces a likely life prison term, which in Germany usually translates to 15 years behind bars.

He denied rape and claimed in court that the two had consensual sex before she fell, got angry and threatened to call the police.

To Germany's far right, Bashar, who is also accused of twice raping an 11-year-old girl in a separate case, has become a symbol of the threat allegedly posed by a wave of mostly Middle Eastern newcomers.

“The problem isn't 'the right' but the knife-man immigration caused by the GroKo that has caused ever more bloody crimes,” the party wrote in a Facebook post.

The AfD became the biggest opposition party when it entered parliament in 2017, riding a wave of public anger over sexual assaults and other violent crimes committed by some recent migrants.

In another case last year, the fatal stabbing of a German man in the eastern city of Chemnitz, allegedly by immigrants, sparked outbursts of mob violence in which far-right extremists hunted people of foreign appearance through the streets.

Bashar, along with his parents and five siblings, first arrived in Germany in 2015, the peak year of the influx which would bring more than one million people to Europe's biggest economy.

His request for asylum was rejected in December 2016, but — in a case critics label as symptomatic of an overwhelmed and dysfunctional system — he obtained a temporary residence permit pending his appeal.

Merkel later conceded in a TV interview that “the case shows how important it is that people who don't have residency rights quickly face a court and can be speedily sent back home”.

In May last year, Bashar allegedly beat, raped and strangled Susanna to death in a wooded area near his refugee shelter.

Her body was then buried in a shallow grave covered with leaves, twigs and soil, near railway tracks.

When her remains were found two weeks later, Bashar and his family had left Germany for Arbil, northern Iraq.

However, he was arrested by Kurdish security forces and, despite the absence of a formal extradition treaty between Baghdad and Berlin, taken back to Germany.

In a controversial operation personally joined by federal police chief Dieter Romann, Bashar was put on a flight back to Germany, with pictures of him disembarking under heavy police guard making front pages.

Bashar also faces charges for a park robbery in which he allegedly beat, strangled and threatened a man with a knife to steal his watch, bag, phone and bank card.

He faces a separate trial from March 19th, accused of having twice raped an 11-year-old girl — once in April 2018 after locking her in his room, and again near a supermarket carpark the following month.

Prosecutors have also laid charges against an Afghan youth, Mansoor Q., who was believed to be aged at least 14 at the time, also for the rape of the 11-year-old girl.

Prosecutors have said Bashar's younger brother — who is believed to be in Iraq, according to media reports — also took part in a sexual assault against the younger girl.