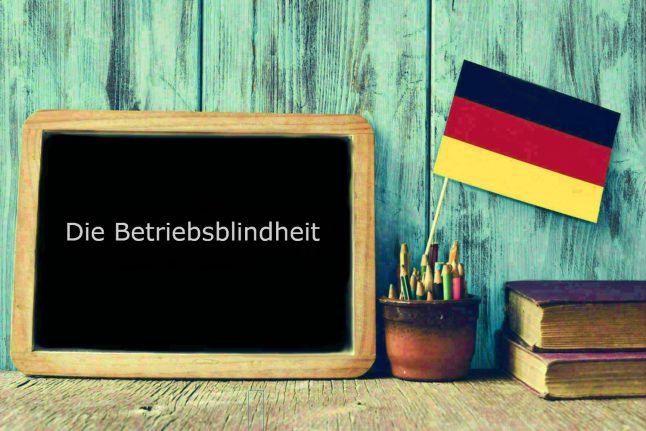 The word means becoming blind of one's own shortcomings within a company – a routine way of working that isn't subject to self-criticism and hence change. 'Betrieb' here means the company.

Betriebsblindheit also exists as a noun, and in English is similar to organizational blindness or tunnel vision.

It is a lightly judgemental term, used critically or self-critically. Formerly a colloquial word, it is now also used as a warning in business administration.

Being betriebsblind can impair efficiency and lead to competitive disadvantages.

The occurrence of Betriebsblindheit is not limited to single employees, but can extend to whole departments of companies that have adopted a same 'ol, same 'ol way of working, not questioning methods or purpose of the work done.

People also tend to get betriebsblind in company structures that are both static and hierarchic. The fact that German has a special word for this phenomenon could be a result of many decades with a fairly quiet and partly unflexible job sector and the mentality of staying with one’s job for a long time.

By now, the word is generally used for the habit of taking actions merely based on routine. It looks like these employees suffer from 'Betriebsblindheit'. Photo: depositphotos/AndreyPopov

She has worked there for 10 years already, and just blindly goes along with the work.

We changed a lot in the company, in order to prevent tunnel vision from occurring there.

I had a bit of tunnel vision in the company, and therefore couldn't come up with a good idea.