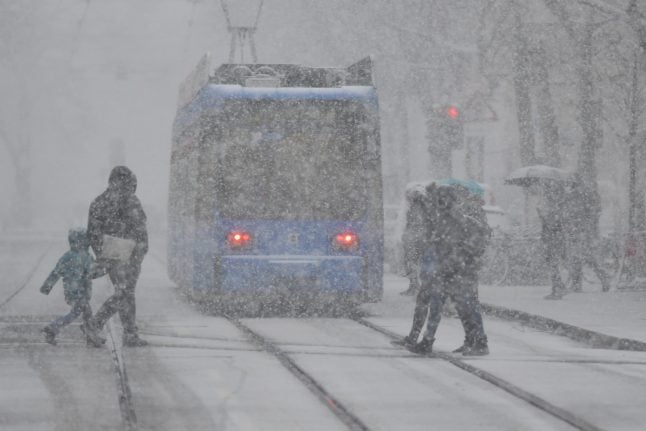 People battle through the snow storm in Munich on Monday. Photo: DPA

To view all the photos, you'll need to pause ad blocker

From fallen trees blocking train lines and roads, to electricity being cut off, storm “Eberhard” has caused havoc throughout Germany. Gusts of up to 164 km/h were recorded by forecasters on Sunday, accompanied by rain and snow.

One person, a 47-year-old man, is known to have died in the storm after a tree fell on his car on Sunday while he was driving near Bestwig in Sauerland.

Train services have also been affected with many being cancelled or delayed, while roads across the country have been blocked by trees.

In Müngersdorf in Cologne, onlookers witnessed a lucky escape for those travelling in this car.

The clean up is getting underway in Dresden, Saxony. Here a tree lies next to a bus stop. Photo: DPA Damage in front of a nursery in Rhineland Palatinate is shown by this Twitter user.

Below, firefighters deal with a tree that has fallen onto a road in Zwönitz, Saxony. Photo: DPA The plaster of a multi-storey apartment building in Hagen, North Rhine-Westphalia, lies in front of the entrance in this DPA picture, below. Twitter users reported that threatening weather was still around on Monday. “Dark clouds” after the storm in Cologne.

The storm also hit the east. In Chemnitz, Saxony, part of the roof of a nursing home was blown off onto a neighbouring building. Photo: DPA. Lots of cars were destroyed in the storm.

In Düren, North Rhine-Westphalia (NRW), the roof of a residential property was blown down, as this Twitter picture shows. Luckily, no one was reportedly injured.

Politicians thanked emergency crews for their work. Malu Dreyer, state premier of Rhineland Palatinate, said thanks to all the emergency services and volunteers who helped clear roads during the storm.

The storm caused huge disruption to the rail network, as well as the roads. In the below DPA picture, a fallen tree lies on a line near Dormagen, North Rhine-Westphalia. Passengers are shown looking at the departure boards in Cologne main station in this DPA photo, below. The storm meant there were lots of cancellations on Sunday and disruption on Monday too, leaving many people stranded. In Düsseldorf there was also chaos at transport hubs such as the main station, Twitter users reported.

Experts have been working to repair train lines, like this photo from Düsseldorf shows, since late Sunday night.

It's not just strong gusts and rain that have hit Germany — the snow has arrived too. In Munich on Monday morning, there was lots of icy weather to contend with. Photo: DPA At a golf club in Kassel, Hesse, 17 trees were overturned in the storm (and covered in snow).

Winter scenes were captured in the Naturpark Fichtelgebirge, in Bavaria. 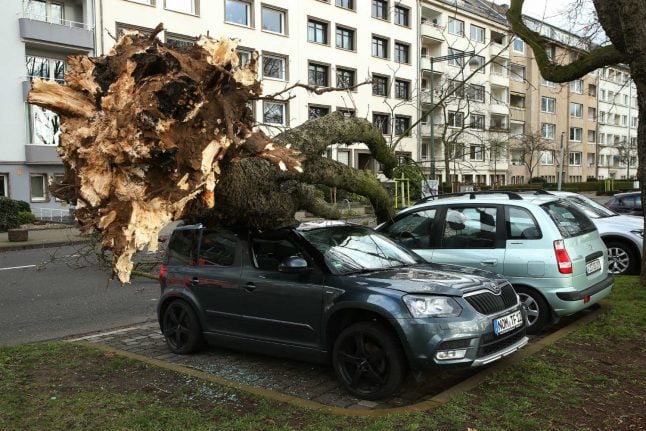 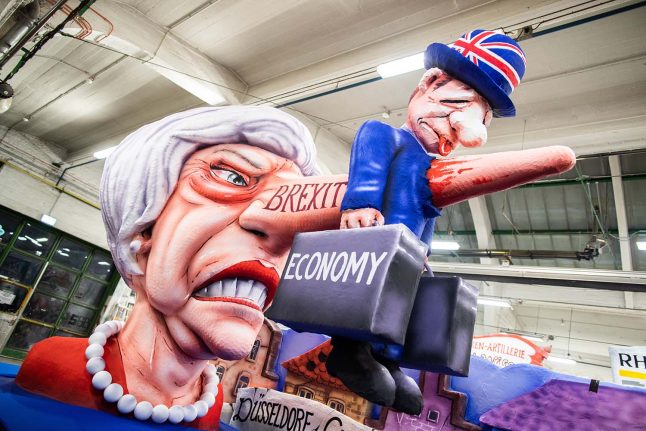