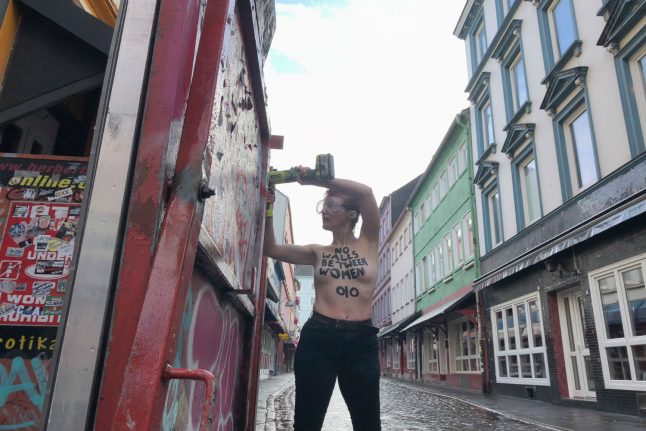 An activist using a power tool for the metal barrier. Photo: DPA

Wearing body paint with slogans saying “women are not goods”, some bare-breasted members of the organisation took power tools to the metal barrier.

“We destroyed a highly-symbolic gate today” of “a public street inaccessible to women”, Femen Germany posted on its Facebook page.

The barrier blocks access for women and under-18s to Herbertstrasse, not far from the Reeperbahn cluster of nightspots in the north German port city.

“We tore down the wall to denounce sexual exploitation of women, trade in human beings and sexual violence that conceals itself behind the closed doors of the sex industry.”

Elsewhere in Germany, organisers expected as many as 10,000 people to take part in a march for women's rights through the capital Berlin, which celebrated International Women's Day as a public holiday for the first time this year.

“Our Basic Law calls for equal rights for men and women in article three.  Implementing this in social reality is an enduring task,” Chancellor Angela Merkel said via a tweet from her spokesman Steffen Seibert.