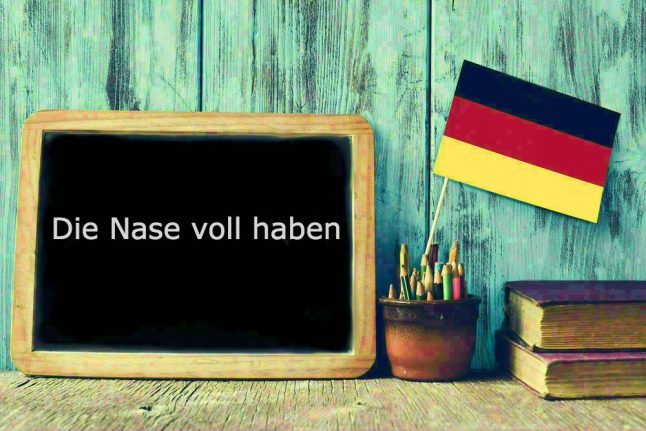 During the third rainfall of the day, you might hear someone mumble “Ich hab' die Nase voll von diesem Wetter.“ That translates to “I am fed up with this weather.“ Hence, die Nase voll haben is a way of telling the world that you are done with something or that you’ve had enough.

It literally translates to “to have the nose full.“ The origins of that proverb aren’t quite clear, but there are assumptions. One of those is that the notion is connected to health – if you have a “full” (in this case, “blocked”) nose, it can be annoying. So if you say that your nose is full of something, it means that this something is really annoying you.

These uses are unprofessional, though, and shouldn’t actually be used. But if someone tells you that they have die Nase voll of something you do, it’s probably best to have a calm conversation about what annoys them and how that could be changed.

Die Nase voll haben has a synonym as well: If you are immensely fed up with something, more than being just a bit annoyed, you can say “Ich habe die Schnauze voll!” Schnauze is a more vulgar word for Nase.

A good use of “die Nase voll haben.”: A Berlin union of public service workers tweets during a recent warning strike of 16,000 employees that they are fed up, and want “to be rewarded for their daily service to the city.”

I am fed up with you!

I have had it with those constant traffic jams!