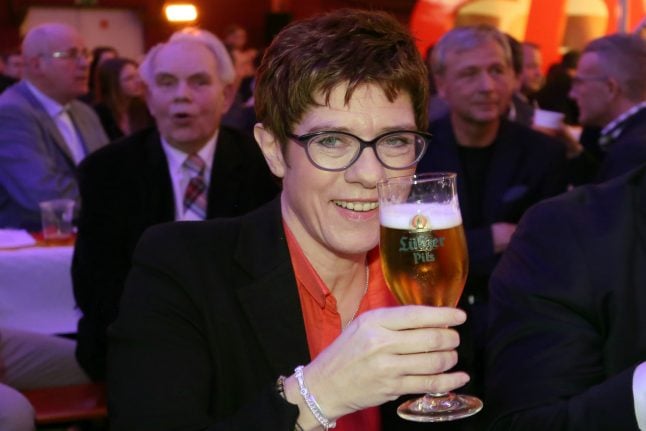 When it comes to drama in politics, onlookers might think Germany is tame compared to other countries such as the UK and its lively Westminster debates.

But in the past two years, perhaps due to a changing landscape in the Bundestag and in local governments – politics has been anything but boring. And political Ash Wednesday (Aschermittwoch) is no exception.

It's a day that originated in Bavaria a century ago, and has become a tradition for all politicians to down beer, hand out sharp insults, jeer and cheer. This year was no different.

'Most uptight people in the world'

In Demmin, Mecklenburg-Western Pomerania, CDU party chief and likely future conservative candidate for the chancellery, Annegret Kramp-Karrenbauer, defended her carnival joke that mocked the idea of gender-neutral bathrooms, saying she couldn't understand the reaction it got.

“If we're so uptight, as has been the case in the past few days, then a piece of tradition and culture in Germany will be ruined, and we shouldn't allow that,” Kramp-Karrenbauer, known as AKK, said. “Right now it's as if we're the most uptight people in the world. This cannot go on.”

Kramp-Karrenbauer had triggered outraged reactions as she attempted to poke fun at politically progressive Berlin in the Lake Constance town of Stockach in southern Germany last week. She said newly introduced toilets for intersex people were “for those men who don't know whether to pee standing up or sitting down”.

In Demmin, Kramp-Karrenbauer also criticized the debate about whether it's appropriate for children to dress up in Native American or sheik costumes.

As the Local reported, a Kita in Hamburg had asked that children did not dress up in problematic costumes during Carnival celebrations.

SEE ALSO: Why this Kita in Hamburg celebrated Carnival without Native American costumes

It's caused a storm in Germany, with many questioning if there's too much of a focus on political correctness. Others praised the decision as forward-thinking.

Kramp-Karrenbauer made her feelings clear, however. The CDU audience applauded when their leader said she wanted a Germany where children could play cowboys and Indians, and “where they're allowed to play with dolls or with Lego or what they want in kindergarten, without you having to tell a 3-year-old that they have to be culturally sensitive.”

“That's the type of madness we're seeing here,” she added.

As the EU parliamentary elections take place in May, party leaders called on their members to deliver a strong campaign.

The leaders of the centre-right Christian Democrats (CDU) and its sister party the Christian Socialists (CSU) used the day to attack right-wing populists in Alternative for Germany (AfD).

CSU chief Markus Söder called on moderate AfD members to resign from the party. “Return and leave the Nazis alone in the AfD. It is time for a change of direction,” said the Bavarian Prime Minister during his speech in Passau.

In Demmin, Mecklenburg-Western Pomerania, CDU party chief and likely future conservative candidate for the chancellery, Annegret Kramp-Karrenbauer, also referenced the AfD. She said: “Those who want hatred, those who want exclusion, those who want nationalism, those who want Germany to fall out of the EU, can vote for them.”

Political Ash Wednesday was celebrating its 100th anniversary this year: in 1919, the Bavarian Farmers' Association was invited to a rally for the first time at the cattle market in Vilshofen, Lower Bavaria – and the political spectacle was born.

After the Second World War it was revived, and now all parties mark the day.

During yesterday's speeches, the AfD slammed all other parties, the media, churches, the Office for the Protection of the Constitution, the European Union and the pupils who've been demonstrating for climate changes. Lower Bavarian AfD district leader Stephan Protschka said: “The EU is a construct that no one needs.”