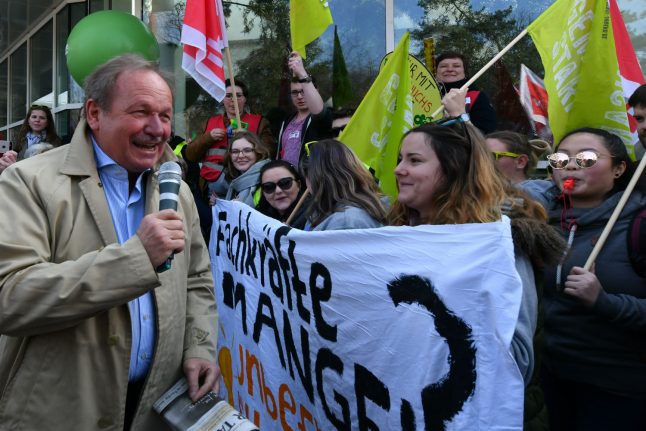 Negotiations between unions and employers are set to continue in Potsdam over the weekend as hopes to avert further strikes in the public service have failed.

As reported yesterday by The Local, talks began on Thursday between unions and employers in Potsdam to resolve the ongoing dispute.

Unions have called for a six percent increase in salary – roughly €200 extra per month – to avert further strikes. They also are asking for an increase of €300 in salary for nursing care, and that apprentices and trainees in all sectors receive an additional €100 per month.

Throughout the week, the strikes have led to closures of schools and public offices around the country.

SEE ALSO: Strikes to shut down schools and offices across Germany Verdi Union head Frank Bsirske welcomes the third round of negotiations which started on Thursday in Potsdam. Photo: DPA

Berlin Finance Senator Matthias Kollatz has said the negotiations will continue in good faith with the goal of averting further strike action.

“From the employers’ point of view the goal in these multi-day negotiations is to put together a package which successfully concludes the process,” Kollatz said.

“We made progress yesterday. I hope that during the day, maybe in the evening, we will succeed in putting together an agreed-upon package. If so, we can get an idea of how close we are to a successful resolution,” he said.

Verdi Union boss Frank Bsirske said that the unions were committed to the talks, but that collective action would follow if their demands were not met.

“If that happens (a failure in the negotiations) then of course we are facing a significant escalation in the collective action,” Bsirske said.